No pictures and very little progress...although I did receive a phone call today from the cable shop indicating that they needed a few more pieces of information to build one cable that they will then ship and I will test fit to the car.  There are far more variables than I considered in the dimensions/requirements of constructing custom cables...and given my track record with measuring the brake lines, I want to test one out before they make a set.  I will most likely get two complete sets just to ensure that I'll never need them again.  I'm hoping to have the first cable by the middle of next week.  I would really like to wrap this up so I can move on to the next phase.

Since I've spent so much time under the car recently - I realized that I might be able to get away with buying the ISP quarter pans and replacing the rear quarters - the front halves don't look too bad.  That would be pretty fucking awesome because it would save me both a ton of money but also a ton of time.  One day when the car is in a permanent home, I'll pull it apart and have a good close look at it and decide where to go from there.  I've got the Klassic Fab pans already but I think I'd prefer to have less work and less cost.  I'm sure the money is getting spent in other areas...

In the parts area - I'm nearly finished with the bag and tag project.  I've come up on 900 lines of parts so far.  I'll probably crack 1000 before I'm finished.  The process now is to organize and indicate the location of the parts to get a feel for what's here.  The hardware is slowly getting organized during conference calls when I can multitask.  At some point, I'll pop it all in a box and ship it off to be reconditioned.  I may try my hand at the 'at home' zinc coating system that I bought half a decade ago and have yet to use.

I got a hint of some NOS parts and while I was able to pass on 95% of them, I did cave in and reserve a few of the more interesting parts: 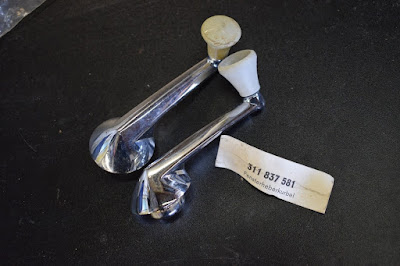 The early winder handle (65 and earlier) on the right is the one I've reserved.  The 66 only knob is super nice as well but I'm trying to stay focused.  I've got a set of the 66 only knobs because they're much more sturdy. 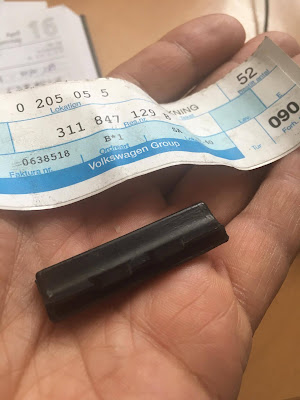 Pretty high up the list of parts I never expected to find NOS are these little hinge cover pieces.  There's a reproduction part available - while they're considered to be better than nothing, they are not durable at all.  I've still got a set of the reproduction pieces but had no plans of using them.

I've reserved 12 of these once they're available. 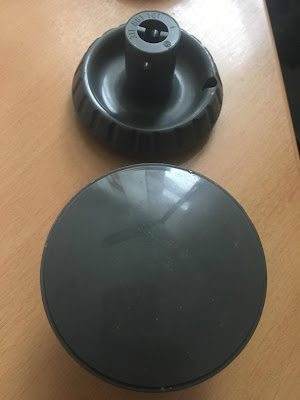 62 or 63 and earlier seat knobs.  Technically not correct for my car but the early knobs are made so much better than the later knobs - they're thicker plastic and don't tend to crack as easily.  I reserved a pair - just in case. 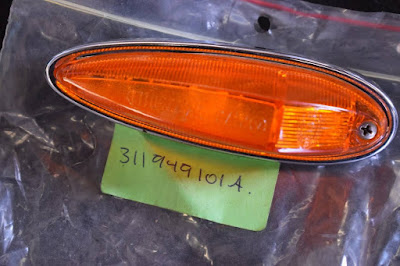