Fishing with a chum bucket 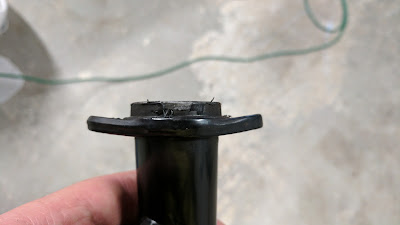 I pulled the carburetors yesterday and let them air out to have the remaining gas evaporate before my plan to put them in a box and ship them off to be checked out...but before I did that I noticed that the manifolds had been black powdercoated - both inside and out.  Then I took notice of the warped nature of the right side manifold (the one that was running hot) - the left one wasn't real flat but it looked a lot flatter than this one.  The thing that you can't see is the crack on the other side - so I can't even hammer it flat and make use of it. 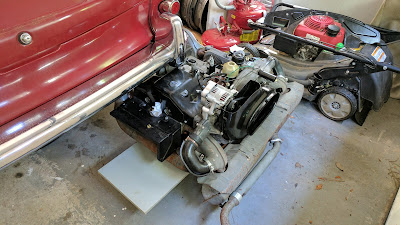 After that, I pulled the engine - the plan was to crate it up and ship it off to California to be rebuilt by a guy I was referred to - one who knows the 1500 S engine...but then I got a message from someone else looking for a couple of parts - we chatted briefly and struck up a deal for the engine...so it's still going to California - just to a different place.  The engine has been paid for and it will be crated tomorrow.  I also sold one of the two remaining ZV/JCU 4R3 distributors.  I'm now down to the one NOS unit and a handful of spare parts for it.

So the tough decision about what to do with this engine has been made.  The next decision of what to buy to replace it will come on Monday when I place my order for both the engine and transmission.  The early 6 volt transmission will get cleaned up and sold, with or without axles.  I'll be selling the starter as well since it's got the 6 volt pinion on it (someone can use it).  I'll pull the early trans out, clean up the subframe and get it ready for paint, a new transmission and engine.  I'm hopeful that once this all goes back in - the car will run well and I'll actually get to drive it for a while without having to work on it so much.

I suspect it'll be quiet here for a while as I wait for the new engine and transmission to arrive.
at June 17, 2017