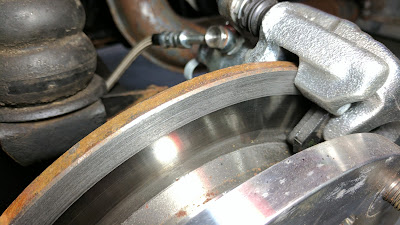 The first thing I saw when I pulled the driver's side wheel off to pop the valve covers was this shit.  This sucks.  A new rotor is $160...but this looks a bit worse than it really is so I'm going to leave this one on the car for now.

The goal was to pop the valve covers, make sure I'm at TDC and then check the drive gear for the distributor. Once that was established, determine the next steps...but I didn't get that far. 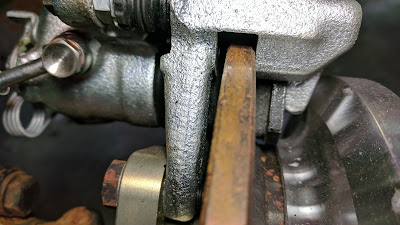 The caliper is rubbing the rotor...so I pulled on the hub and it moves - meaning that it's not torqued down enough.  I'm going to try to tighten them again with a much larger bar and without the torque wrench to see if I can get them to stop moving.  If it still moves when I've run out of room to tighten, then it'll have to come apart.  I've checked the parts diagram and I definitely put it together correctly - must be the axle nuts...which is weird because I didn't have any problem with the NOS rear drums I installed previously.  Not much I can do about it now other than fix it. 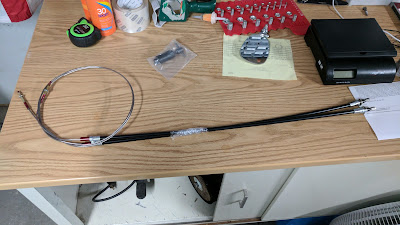 24 hours ago, the USPS had no clue where the shipment with my cables was...today, however, they showed up out of the blue.  In typical fashion, they stepped on the box a few times before delivering it to me.  I absolutely loathe the postal service at my current address.

I wasn't able to install the cables, however, because the spacer I'd used was slightly too thick so I'm now on a hunt to find the correct thickness.  If I cannot locate the correct spacer, I may try to remove some material from the washers I bought.  Nothing ever just 'fits' anymore.


During the work to check/set the valve gap, I discovered that the intake valve on the #3 cylinder was loose - horizontally.  I quickly noticed that the spring washer was missing - if you look real close, you can see it on the bottom right of the image

The exhaust valves are stupid tight - which is probably why the engine was running hot and rich.  Potentially why the washer broke and why I'm now having so many problems - not likely to be the distributor at all. 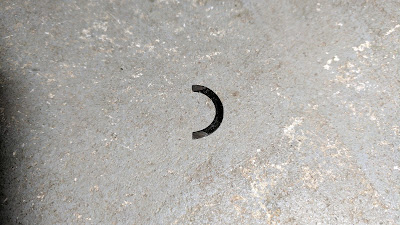 No clue where the other half went or currently resides.  I didn't find it in the oil when I changed it and the car hasn't been driven since.

I'm done for a while until I find the little things that, once again, hold up my ability to drive this f%&#@ng car before I lose interest completely. 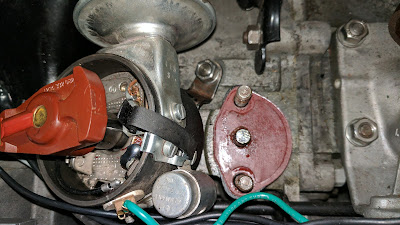 UPDATE: As I found myself with a little more time, I went back into the garage and pulled the fuel pump - to find a wet gasket that smells like gas.  I cannot say for certain that this is where the fuel that was in the oil came from but it's at least one place.  The initial plan is to swap out to another fuel pump and then swap to an electric pump - another push toward modernization.  I'm not sure how long the old diaphragms will last with the new fuel mixtures - maybe I've already found out...I did chat with another Type 3 owner and we discovered that we had a similar idea: gut an original fuel pump and make a loop out of the inlet and output to retain the original look but feed the system with an electric pump.  Someday when I've got tons of time on my hands, I may try that... 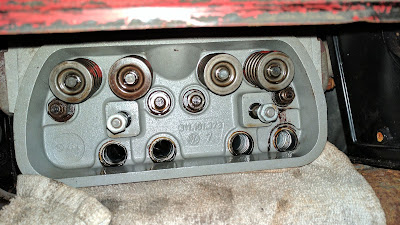 I pulled both rocker shaft assemblies and all of the push rods.  Used a telescoping magnet to see if I could fish out the other half of the washer to no avail.  I wasn't able to find it...I might find it if I drop the drain on the oil but I hesitate because the oil is stupid expensive.

I ordered up new adjusting screws, jamb nuts, solid rocker shafts to eliminate the wavy washer/spacer things and I'm thinking about picking up an electric fuel pump tomorrow.  I will then have replaced a lot of the potentially flawed parts on this engine.  Ironically, the more I spend on this engine to get it functional - the more I want to yank it out and replace it with the 1904 and a rebuilt freeway flyer...but there's a part of me that doesn't want to admit defeat yet.
at June 03, 2017