I spend my allowance on all these pretty things 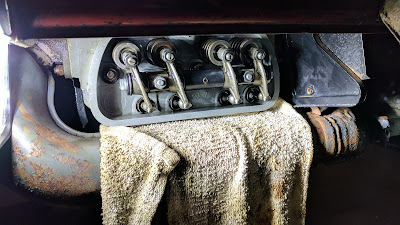 Replaced both rocker assemblies with solid rocker shafts and new adjusters and lock nuts.  Getting the spacing just right took a hell of a lot longer than I thought it would but it's done. 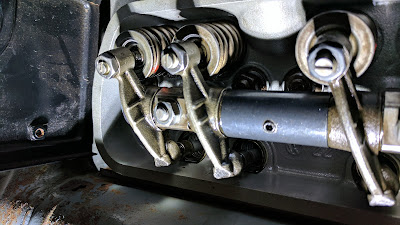 The exhaust valve on #2 required more adjustment than the other valves and that leaves me a tad bit concerned that it possibly got fucked up when the engine was running 'not right'/hot.  The tip sticking out of the spring looks to be about the same length as the others but that's all I really know to look for in this situation.  I'm going to try it 'as is' and see what happens.  If the valve is cooked, that might be the end of the line for this engine.  I'm kind of done fucking around with it just to have it break somewhere else. 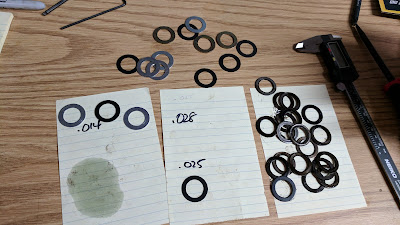 The tolerance on the shims isn't great so I had to get the micrometer and measure every single one until I found the right combination to get me down to spec.  Out of the hour it took to install them, I spent half that time just putting together the shim combos. 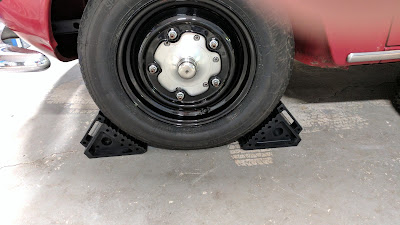 I also ordered new wheel chocks because when I tried to tighten the axle nut on the rear a few days ago, I also ruined my metal wheel chocks.  As in "flattened" them.  These are some concoction of very stinky rubber and they're taller than the metal version they replace. 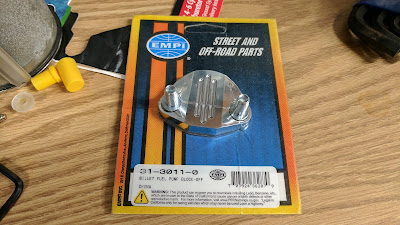 Highly likely to the be only EMPI part that I ever buy.  It's low tech so I'm not worried about a part failure.

I'm testing out another mechanical fuel pump for now but if it shits the bed, the electric pump is ready and waiting. 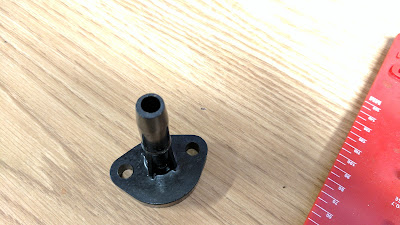 Ordered a replacement fuel pump block and this piece of shit arrived.  The hole is off center and not straight.  The supplier offered to take it back but it'll cost more in postage than the refund so I chucked it in the trash.  I don't know why they bother to stock and sell shit parts that are just going to irritate the customer.

I received an email today that my high tech distributor is enroute - so about two weeks from now, it'll arrive and if the engine is functional, I'll test it out.  I'd love to get rid of points and improve reliability at the same time.

Next up is static timing the engine, resetting the carburetors to spec (again) and then trying to fire up the car.  Once that's off the list, I'll install the tach - I think I've talked it to death and am going to 'have a go' at installing it...hoping I don't fuck it up.  Then I'll revisit the horn situation/fuse box, driving lights, etc.  Work is ramping up again and I'm going out of town for a few days so progress will be slow for a while.
at June 08, 2017