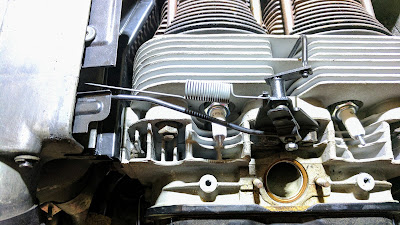 As soon as I attached it to the intermediate lever, the flaps sprang open.  So, a minor victory in that I don't necessarily have to tear the engine apart to fix the flaps. 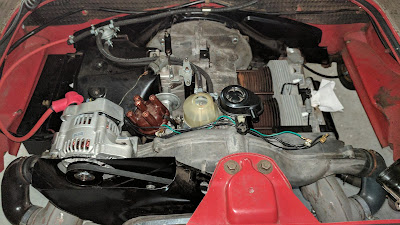 But the crux of the matter remains - the head on the 1/2 side has a tweaked valve that'll require pulling the head, ordering parts and waiting for them to show up before I can put it back together...and there's no way to know if even that will resolve the problem that's been haunting me with this engine.

The carburetors are being packaged up and shipped out for re-work - there's still something that's not quite right about them.  I'm not sure if this is throwing good money after bad at this point...or if I should even bother since it's money I could spend on the new engine.

I called up the transmission shop today and got pricing for the transmission rebuild for a 1904.  It'd be possible to get it in three weeks.  The engine would take another four to five weeks to be shipped to me once I sent all of the Type 3 specific parts to California.  That's basically the whole Summer with no car to drive - just sitting in the garage - and that's kind of a bummer.