Any man can make mistakes, but only an idiot persists in his error. 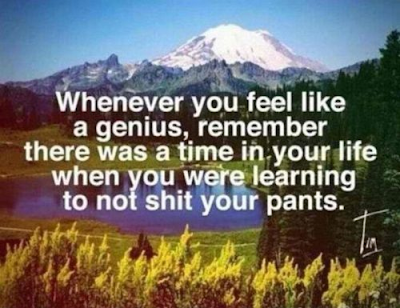 I planned to get out to the garage last night to build up the passenger's side spindle...but I fell asleep at what I suspect is right around the time Ross Perot likely takes a bath.  I didn't get anything accomplished yesterday on the brakes.

So today, after some vacillating, I headed out to the garage and pulled up the right side spindle, cleaned out the threads, and went to it.  All four bolts threaded fine but the longest one started to bind about 3/4 of the way.  I pulled it out and started with a different bolt but it wouldn't thread no matter what I tried.  After spending 15 minutes trying to get it to thread, I decided that I should just stop while I'm 'ahead' and do something else.

Time to try again with another spindle.

Picked up another one, cleaned the threads and the test bolt threaded just fine all the way to the head on all four holes.  I placed the bracket on the spindle and started with the long bolt first.  The first half was normal.  Then it got tight. And then it got warm.  I tucked my tail between my legs and backed it out slowly after letting it sit for 15 minutes to cool.  Last thing I need to do is snap a fastener in a newly powder coated NOS spindle.  I eventually got the bolt out intact and found nothing amiss but decided that I'd remove the other three bolts entirely and start with the long bolt first-with some grease to lubricate.  Made it almost to the end before it started to get tight and warm..but I persisted and snugged it up before installing the other three bolts.  I installed the steering arm and lock nuts before moving on to the hub/rotor.

I packed the bearings with grease and put the inner bearing on its race in the hub.  And in what I'll call one of the dumbest fucking things I've ever done, I flipped it over and put it on the spindle.

Without the grease seal.

As soon as I felt the bearing seat on the spindle, I happened to glance over and notice the seal sitting on the bench and a sincere feeling of dread and disappointment washed over me.  I pulled the hub/rotor off of the spindle, wiped the grease and, for some reason, tried to pry the bearing off of the spindle with my fingers.  I knew it wouldn't work but my hands decided to try anyway...and then the bearing came apart and rollers went flying across the bench.  Chinese bearings are packaged with the CSP brake kit and they're apparently not very durable.

An hour and a half after I began, I gave up and came back inside.  It's too hot in the garage (over 85°F with nasty humidity) and I'm tired.  Apparently getting the same amount of sleep in 24 hours as the average domesticated cat didn't work out for me.

So there's a spindle sitting on my workbench with half of an inner bearing stuck to it.  And a bolt that may or may not come out intact.  I decided it was a good time to let it go and come inside.