“He who jumps into the void owes no explanation to those who stand and watch.” 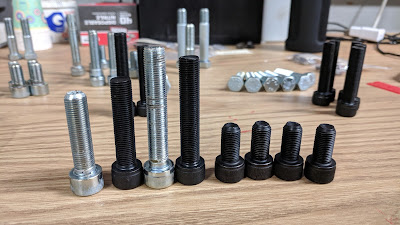 The bolts I bought from China arrived today.  They're a more correct length than what came with the brake kit.  The bolt on the left was a little bit too short, the second one was too long, and the other four were okay.  I'll likely be installing the black oxide bolts vs. the plated bolts because the plating looks like shit.

Still no word from the powder coat shop...so much for 'short turn around' given that we're going on week 3 at this point. 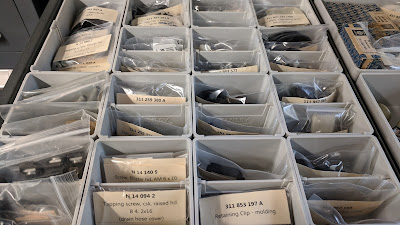 I spent a decent amount of time over two days further organizing and refining my inventory.  I found a few additional parts to, ahem, part with, so I posted them up and most sold within 24 hours.

I have bin tag label holders on the way so that I can take my OCD to yet another level with parts organization.  I think barcoding is the next logical step, no?

I'm now down to NOS front and rear hinges, hinge stays and hardware.  The used stuff is either posted for sale or sold.  I sold off one of the two spare 67 only brake fluid reservoirs since I'm highly unlikely to use it in the future. 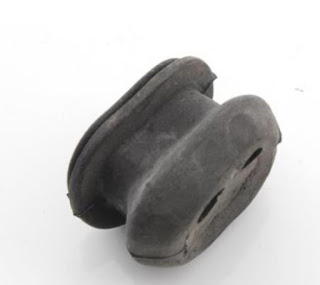 While looking around for something completely unrelated, I stumbled upon these Type 3 specific pan boots.  I bought four and they're enroute from Germany.  I have an additional quantity on reserve - which I will buy once I have inspected the first batch.

The other elusive part is the 'missing' hinge rubber - I've been in conversation with a source in Germany about getting my grubby little paws on one.  The next day or so will determine if that happens.

It's still a little under two months away but I'm preparing for the move to Illinois and taking a hard look at what I have left in parts to decide if I can let any more of it go to another home.  It's hard to let go when I've spent so much time finding this stuff but I know I won't use it all (nor do I really need it) so now might be the right time.
at March 29, 2018