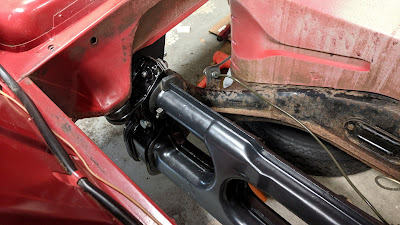 Spent most of the day getting this cranky bastard installed.  I tried to install the late beam collars but I just couldn't get them to seat properly...so I reverted back to using the original version.

NOS parts and an old car are not good friends - I fought this thing for two hours to get it installed and all of the bolts to line up and snug up correctly.  I spent almost an hour just trying to get the upper bushings that mount to the body under the fuel tank - new EPDM bushings and a car that had never been apart proved to be tough.  I had to jack up the car at the bumper bracket to pry the body away from the axle beam and then stuff the bushing in the top space using a variety of wrenches, wood blocks and a dead blow hammer.  It was a real treat! 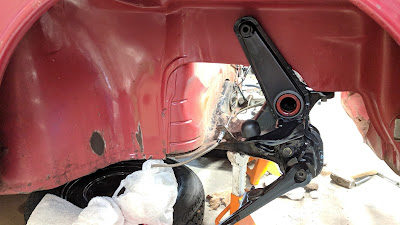 I ordered new pittman arm bushings and wheel seals along with a few other random parts.  I hope to be ready for them when they arrive. 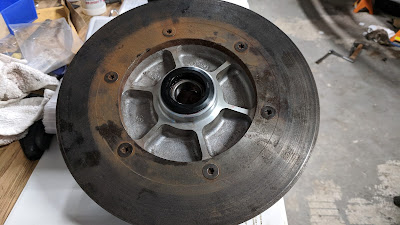 I dropped the spindle/brake combo off at the local brake shop.  I ran out of ideas so I decided to let someone else do it.  They didn't charge me anything because it took less than 5 minutes to pop them off.  The right side bearing was just a tad bit loose - this may have been the issue that contributed to the 'wandering' while driving.  In any case - it's all getting fixed up and will be back on the car sometime next week.  I'm leaning toward wanting to paint the brake bracket to keep it from rusting again but it's too cold/humid to paint so I may have to wait a while.  I'll put them back together so I can work out the ride height on the front beam and then take them apart so I can de-rust and paint them.

Tomorrow - I'm going to try to get the lower arms set and install the upper arms and do another round of garage clean up bingo.  I don't want to install the steering box until I've got a pittman arm installed on it and I haven't yet worked out a solution for that...perhaps I'll spend most of my time working on the brakes/spindles/bearings.  Then I can pop them on the car and drop it to the ground and see how well I documented the lower torsion arm location when I took it apart.  I may be smacking the retaining plates with a hammer - which means I might have some touch up painting to do.

It's coming together but WAY slower than I hoped.  Once this is all done - I get to try to start the car and see if my battery drain issue persists or has been eliminated...and I've got the doors to deal with as well.  One thing at a time though.
at March 01, 2018