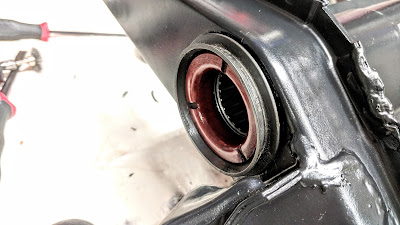 Got back to work on the front beam today - cleaned out the overspray paint from the bearing surfaces (I should have taken the time to better mask the area) and fit the new thrust washers and seals to the upper torsion housing.

I cleaned the torsion arms of paint overspray (again, should have masked better) and cleaned them real well with steel wool on the bearing surfaces.

I removed the zerk fittings from the beam - removed paint overspray and took the upper fittings apart to ensure that crusty grease was cleaned out.  There's a super tiny ball bearing and spring in them so I had to be extra careful I didn't lose any of the pieces.

The new upper ball joints arrived today - I promptly removed the dust boot, removed the crusty grease, cleaned them out and applied fresh grease and replaced the boots.  They're ready to go now.

The dust cap removal tool arrived but it has proven to be ineffective at removing the dust cap on the hubs.  I'd leave them alone but I know there's an issue with the bearings in the left hub (I can hear them clicking) which means I didn't install them properly so I also plan to replace the bearings in the right hub as well (on the assumption that I screwed up both bearing installs since they were done at the same time).

I've done a fair amount trying to remove the cap and have marked the surface of the hubs (which is super fucking irritating given their cost) and still can't get them off.  I may give in and take them somewhere to get them removed...I can't think of another non-damaging way to get them off and continuing to buy tools that I will probably never use again doesn't seem prudent.

While I'm documenting failures - I've failed three times to install a new steering damper bushing in the pittman arm and managed to scrape some of the paint off of it in the process.  At this point, I have no usable pittman arm in decent shape.  I'm not really going to worry about it until I get closer to needing it - which, at this point, is a couple of weeks away.

The goal for tomorrow is to install the cleaned zerk fittings and get the lower torsion arms installed.  The tricky part of this is getting the preload correct.  After that, I'll look to mount the beam to the car and install the upper torsion arms (easy) then move to the tie rod ends - I'll probably take those apart and re-grease them as well - who knows how long they've been sitting in the box.  I've decided to use the other set of spindles so all I have to do is swap the brake parts over to the clean spindles once I figure out how to get the dust caps off.  The parts need some cleaning before they're assembled but I don't expect that to be too time consuming.