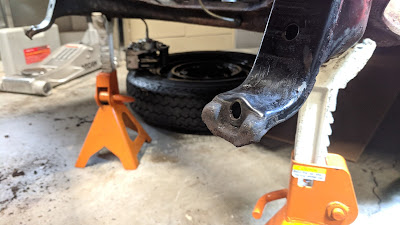 I finished cleaning up the front beam, coated it in Ospho and put it in the shed to dry.  The torsion arms were pulled out of degreaser and rinsed off - once they're dry, I'll wipe them down in Ospho.  I used a little heat and a few tools to bang out the bent frame head bracket.  It's not perfect but should be a lot better than it was.  After cleaning under the left fender while contemplating the project of painting the frame head - I decided to not paint it right now.  I've got enough balls in the air and it's high time I admit that I'm not all that good at juggling.

I picked up some Evaporust and put a few things in it to test - although I don't think a whole lot is going to happen because it's too cold (needs to be 65ºF to work and it's only 58ºF).  I want to pull the spindles apart but I couldn't get the grease caps off of the hubs...so I will have to find another tool to get them off without damaging the alloy hubs.  There's a decent amount of surface rust that needs to be dealt with and now's the time.

Tim received the steering box, put it on his workbench and it is exactly to spec...which is a bit puzzling.  We had a chat about it - he's going to open it up and check out the inside to see if anything is off...otherwise he'll box it up and send it back. 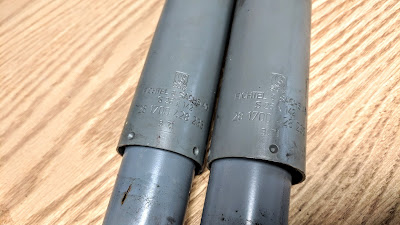 Tested out the 47 year old Sachs shocks and, to absolutely no surprise, discovered that they were completely dead.  So I did some digging and bought Bilsteins for the front end - should add some stiffness and improve response.  I also bought three new tie rod ends (not NOS).  I want to make sure I've checked and fixed everything and they're not expensive.  I also bought a set of Timken bearings - as spares - just in case something goes sideways on me when I pull the spindles apart.

Next week, I'm hoping to paint the beam and torsion arms (maybe Monday...likely Tuesday) and get the beam back together.  I'll fill in the few remaining days with cleaning various things on the car.  I'd like to get the inner surface of the front fenders cleaned out in the down time.  Little dude is out of school Friday and Monday so I may not get much done over the long weekend but some of it has to be planned around the weather (warm on Monday and Tuesday then rain the rest of the week).  I'm looking forward to the flurry of activity when this front end goes back into the car.  Then I get to do the thing I'm dragging my feet on: re-index the rear torsion bars to eliminate the rear camber.  Once that's done, then I get to work on the windows and, hopefully, get the car over to have the carbs tuned properly.  Should be good to go by the time we're ready to move!

I also screwed around with the layout and color of the blog as well as changed the domain.
at February 15, 2018