The shocks arrived last night - I pulled one out of the box and tried to compress it.  It took all I had to get it to compress about half way so I think they're going to be too stiff...and then I ordered oil shocks.  I'll probably return the Bilsteins.

The paint and tie rod ends arrived today - I was tempted to clean off the beam and get painting but the humidity was quite high and it'll be a bit warmer on Tuesday so I reluctantly left it all alone.  The weather, however, was pretty good for the Evaporust to do its thing.  I got most of the hardware cleaned off and I was able to use the parts book to identify each piece and find suitable replacements from my hardware drawers for the couple of pieces that were very corroded.  And then I remembered: I started an Excel spreadsheet a couple of years ago that documents the hardware, part number and where it's used.  I hand wrote some notes to update that file later - I think the best way to do it is go by the parts book and update each time I work on some part of the car.  After the current project, I should have a pretty solid catalog of the front beam bits entered.

I did a lot of clean up this morning - there was a lot of stuff left out from my 'sell through' dig out - I put it all back and made a lot of space in the process.  The torsion arms and pittman arm are coated in Ospho - so it's all ready for paint now.

When I pulled the front end - I noticed that the front brake calipers had some corrosion on them and since I'm cleaning up the beam and spindles, etc. along with the beam, I was curious about finding the calipers locally - they had to come from something and they're probably not expensive.  Using good ol' Google, I only came up with one possibility - the front brake calipers from a 1992 Pontiac LeMans. 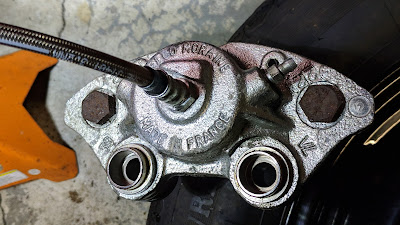 This is what's on my car now (from the kit I purchased a couple of years ago).  Delco Moraine, Made in France and a bunch of random numbers that, from what I can tell, don't mean anything useful when trying to figure out what the calipers are from.  Brakes are a fairly simple commodity - one version can have 20 different part numbers and be used on a hundred different cars/trucks.  It's probably rare that a cast disc brake caliper is made for less than a handful of models. 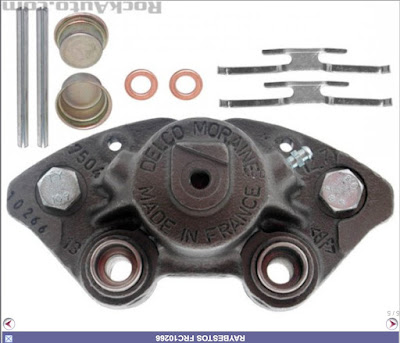 I did a search on RockAuto.com and found this image of the Delco Moraine caliper specific to the 1992 Pontiac LeMans.  I was only able to 'match' them from pictures at this point because there are no dimensions provided.  At first glance, they look to be a decent match.  Another 'up' side to this is that I can get a remanufactured PAIR of calipers with brake pads for $20 + shipping and no core charge.  The other nice thing is that brake pads are $6 per set...a far cry from the $40-50 from CSP.

The reman calipers are available at my local auto parts store - I might just go get one and see if I can get some measurements off of it (or buy a set of brake pads for $8).  It'd be nice to know what to buy for replacement parts from a local source.
at February 17, 2018