Waiting on the weather

I didn't get to paint anything today...the weather was colder, wetter and more humid than forecast so I'm waiting until Thursday when it'll be warmer and only slightly less humid. 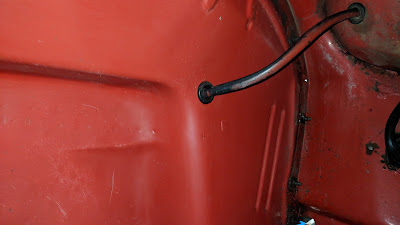 To pass the time, I tackled cleaning under the passenger's side fender well.  I got it quite a bit cleaner than the driver's side a few days ago. 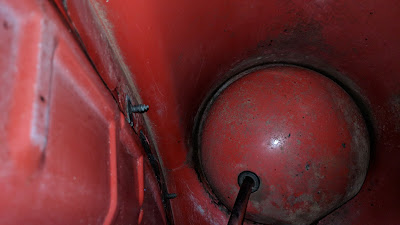 Again, I eradicated all of the accumulated dirt on top of the headlight bucket and at the rear top part of the fender.  No rust through - just a lot of dirt.  These fenders, in spite of a few dents, are in rather nice condition.  It'd be pretty cool if I wound up being able to fix a few parts and keep them on the car when it's painted. 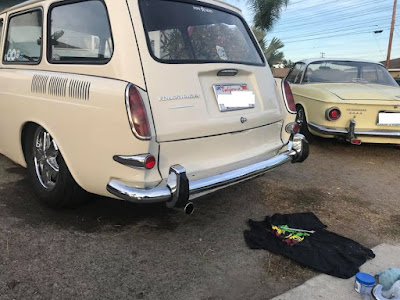 I've been thinking long and hard about the CSP Python exhaust - debating whether I should try to modify the VS exhaust that I have or sell it and buy the Python.  It's hard to justify the cost of the Python but I'm more than confident that it'd fit well and sound great.

The car in this photo belongs to a guy I chatted with on Facebook - he's running the CSP Python on his 66 Square and says he really likes it.

The Vintage Speed exhaust, on the other hand, is going to need probably $200 in modifications to fit my car properly - an expense that means that I won't be able to sell it later because it'll be fit to my specific car.  So the question remains:  Do I spend it to modify the VS or sell it and use that toward the Python?  I think the decision would be easier to make if I were actually driving the car. 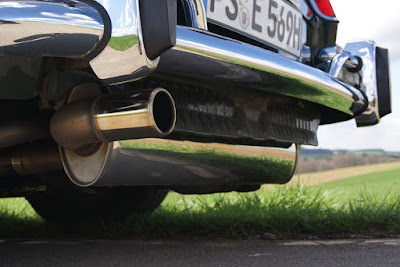 It's hard to argue just how well this thing fits with the bumper and the bumper guard. 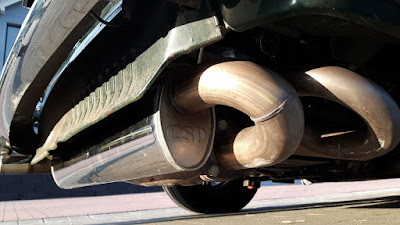 This visual - albeit of the largest exhaust they make - detracts from the overall look of the car and it loses some of the 'sleeper' style it has with the VS exhaust.

This specific example is on a 160hp car and it's got a much larger pipe system than the one I'd buy.  I don't plan to increase the displacement of my engine beyond what's in it now.

I've tabled the decision until I've had a chance to finish some of the other things I have going on - namely getting the front end done and then addressing the door situation.  Once those are done - I'll deal with the carburetor fine tuning...and I'm hoping that the electrical gremlin was eradicated when I removed the electric fuel pump and safety relay.  The only other 'new' thing on the car is the tach...not sure how that would cause a problem but I suppose anything is possible.  Still juggling too many balls to be changing anything else just yet.
at February 20, 2018