Feb. 6:  I have a suspicion that the rear end camber situation is either partially or completely responsible for the front end handling.  I'm still planning to inspect the front end and make 100% sure that it's in tip top shape.  I have to get in there and swap out the fuel T (or add an adapter) when I bypass the fuel pump anyway.  I like the simplicity of a mechanical fuel pump but there's something 'modern' feeling about the electric pump - not to mention the cleaner engine bay.

As of now, I have four main issues:

1. An electric/power drain somewhere in the car.  Strong enough that it drains a fully charged battery in 48 hours to completely dead.  Not sure when it started but wasn't a problem before this engine/fuel pump.
2. A super loose feeling front end - possibly caused by a camber issue in the rear end.
3. Not quite perfect idle on the carbs and a running rich situation.
4. Exhaust tip that is both too wide and too short.  Fouling the apron and the left bumper guard.

Feb. 7:  Had a chat with a fellow Type 3 owner.  He suggested that I get a wide-band to help tune the engine and improve drive-ability.  I'd looked at them a while back but didn't buy one because I was running a stock engine and didn't really think it'd be of much help.  Now with running the IDFs, it's probably high time I either get one or borrow one.  I ran the suspicion of the rear end contributing to the the suddenly squirrely front end and the question about the shocks came up.  I'm fairly certain that I tested the rear end settle without the shocks but I'm going to remove the lower shock bolts to confirm.  It's much faster to swap out shocks than re-index the torsion bars and, while curious about what's under the rear fenders, it'd be great to have a simple fix.

If it comes to it - I may deal with the torsion indexing by removing the rear fenders vs. dropping the subframe.  I haven't had much luck doing it in the car in the past - especially when having to do a mix of inner and outer splines to adjust minutes as well as degrees.  I'll jack up the car, level it side to side and front to rear - take an angle measurement once the spring plate is free and make adjustments from there.  I'll get a peek at what's under the fenders - could be good and/or bad depending on what I find.

Feb. 9:  Early in the day today, I decided to tackle the slowly mounting list of minor issues on the car.  I started by getting the dead battery, used oil and short shopping list and heading to AutoZone.  I dropped the battery off, recycled the oil and decided to do the shopping later.  I headed across the street to a shop that 'does muffler/exhaust work' to see about modifying the VS exhaust.  After a few minutes of discussion, the guy tells me that he doesn't do any welding and suggests that I go to the Midas 'the next light down the street'...reluctantly, I go check it out.  I pull into the parking lot and am greeted by five employees (apparently they had nothing else to do) who all gather around the tailgate of the Volvo to look at the exhaust.  After a few minutes of discussion, three wander off to guzzle Monster and smoke cigarettes, and I'm left with what I'm guessing was the manager and the dude who welds stainless.  Welder guy says that probably doesn't have the skills to make the modifications I'm asking about (1.5" narrower pipe projection and 2.5" longer tip).  Then the two guys start up their own conversation about Randy and I'm just standing there, listening to some welding legend, and they talk for a couple minutes longer until I interrupt and ask if there's a secret to finding out where this dude is located.  I get the name of the cross streets and the city - no address or phone number - and decide I've had enough of this scene and go on my way.  I decided that it was fairly pointless to go to chat with Randy without the car so I just went home. 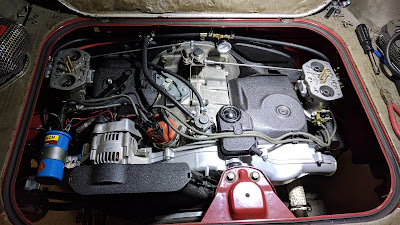 I started on the fuel line project at the engine.  I installed a rebuilt late pump and hose, replaced the fuel filter at the side of the transmission and made sure everything was snug.  I'm not 100% happy with the fuel line routing but it's temporary and I'll reroute it once I can confirm that the fuel pump was/was not the issue. 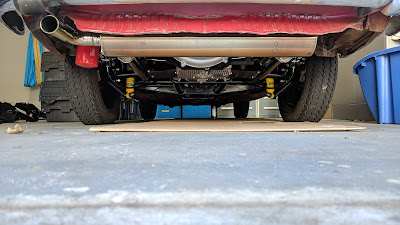 Once that was done, I then switched gears to the rear shocks while I had the car on jack stands with the rear wheels off.   The photo is of the rear of the car with the shocks 'on' to show the camber situation (and just how mangled the rear apron is, I guess).

I removed the bottom bolts for the shocks, replaced the wheels and dropped the car back on the ground.  I didn't take a photo because the result was bittersweet - the car didn't settle down more than when the shocks were attached.  That means that I'm able to concretely discern that it's not the shocks causing the camber.  The part that sucks is that it's one more vote for re-indexing the spring plates to get the camber fixed.  I am pretty sure I checked this early on but it would have been nice to be wrong in this case. 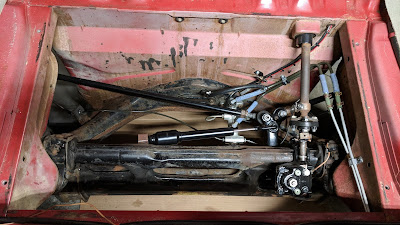 Once that was done, I moved up front and drained the fuel from the tank, removed the tank, removed the electric fuel pump and the associated adapters and surveyed the scene with the wobbly front end.  With the front end on jack stands, I pushed/pulled on the top of each wheel - neither moved - so I'm pretty confident the wheel bearings are still solid.  The upper torsion bar adjustment is tight and the tie rod ends are snug.  I pulled on the wheel (side to side to simulate steering) and found about 1/4" of play between the wheel being 'turned' to one side (left/right) and the steering box response.  I'm guessing that the steering box needs some adjustment to snug it up a bit and remove the 'play'.  I haven't yet pulled the damper to check it for smoothness through operation.  There is a bit of drag on the front calipers as well (more than what I'd consider normal) - wondering what the deal is with that since all of the brake bits are new/rebuilt.  I may see about getting another bleeding session in for the brakes.  If that doesn't do it, I'll pull the calipers apart and inspect the scene. 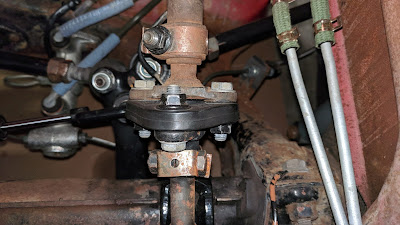 I guess, in the grand scheme of things, this is minor but it bugs the shit out of me. 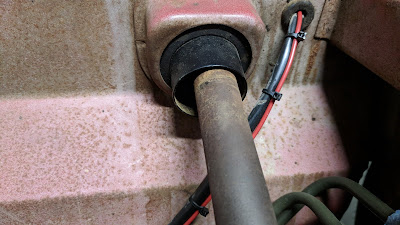 The steering column (rod) seems to be way too close to the top of the column tube but I haven't been able to figure out why...or how this happened.  I haven't removed the beam but I did replace the steering/ignition column and the steering box.  The steering box clamp has been triple checked to make sure it's on correctly.

I have another steering box (the rebuilt original) and I may just swap it out with the box that's currently installed.  Perhaps there's some geometry thing going on that I don't know about/can't see.  I've got time and the car is torn apart...and it's going to rain most of next week...so the timing seems good.  I still need to pull the electric fuel pump safety relay - I could leave it in the dash but the five wires hanging down from under the dash visually bother me and it's an easy process.

Feb. 11: Little dude wanted to work on the Volkswagen so we set out for the garage before lunch today.  I took him up on the 'help' and we got started. 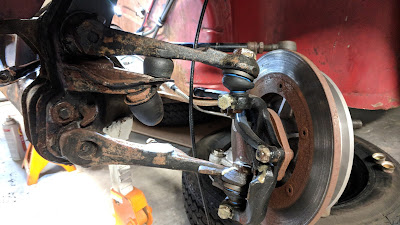 This car has only been in one snowstorm - the one it went through on the way from Illinois to Georgia.

The plan now is to pull everything apart (leaving the front calipers connected to the master cylinder) and clean it up.  I got through most of what's needed to remove the spindles with the brakes.  I'll break down the front beam, clean it up and (maybe) paint it before putting it back on the car.  At minimum, I'll clean it up and replace the bushings. 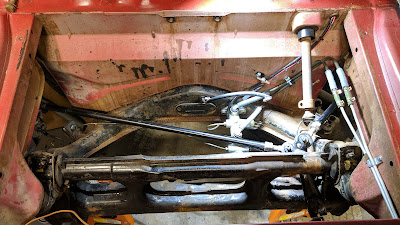 ...and because I seem to refuse to learn this lesson - I pulled the steering box before removing the tie rod ends from the pittman arm.  I'm debating a trip to the powder coating shop to get some parts cleaned up for this project.  The front frame could use a clean up but I'm on the fence about continuing to dig when I'm not yet sure if I've reached the bottom of this hole. 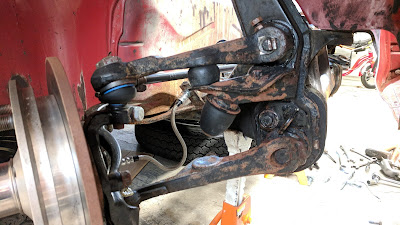 These used to be covered in oil/grease and, ironically, I cleaned them a couple of months before we moved.  I suspect that if I'd left all of that grease in place - most of this rust wouldn't be here.

I'm considering taking it all apart, cleaning it very well and using POR 15 to paint the torsion arms and the beam.  I can't powdercoat the beam so I'm going to have to use some sort of paint.  I can get the POR 15 locally and with the beam out, I could clean up the front end of the car. 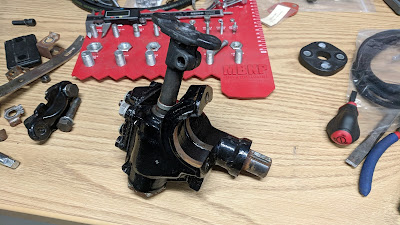 I determined that the major cause of the loose steering was due to the steering box.  It had a decent amount of play in it that I couldn't adjust out without causing some binding in the box about 1/2 way into what would be a right turn.  Something isn't right in this box.  I'll get another rebuilt box and see if I have better luck.

I had a feeling this was going to turn into a larger project than I wanted...but I've got the time so I suppose that's a plus.