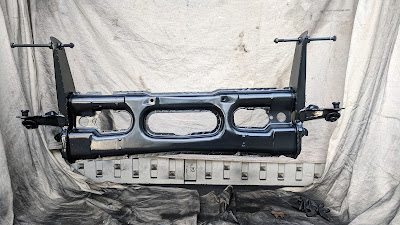 I took a look at the finished results of yesterday's work - and found quite a few places where I either didn't get the paint on the primer or the finish wasn't consistent.  I briefly tried scuffing up the 'missed' areas and discovered that I'd be better off scuffing up the whole thing and using the one solo can of paint (purchased a couple of years ago) figuring that it might be a different color.  I had a little paint left in the second can so I used it on the touch ups.  I used the solo can of paint on the beam so that, at least, it'd be the same color while the torsion arms might be a slightly different shade of black. 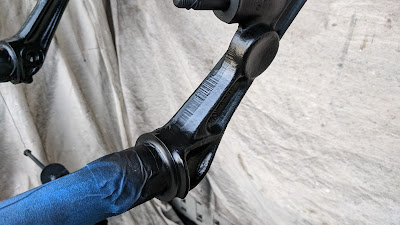 The lower torsion arms both needed more paint on the inside 'nubs' - so I scuffed them up and hit them with the rest of the paint from the last of the two cans of paint that I recently ordered.

They flash cured pretty quick because the painting conditions were ideal (77ºF, 48% humidity).  I'll get the excess paint off of the inside bearing areas later next week before I attempt to assemble the pieces.

The plan is to clean each of the four torsion arms before moving to the center axle beam part and attempt to assemble it without doing too much damage to the paint.  I'm looking forward to getting this off the table and moving on to the door situation so that I can have functional windows again.  Once that's resolved - I'll work on getting the engine tuned a bit better and running more smoothly.  I'm going to hold off on the rear torsion re-indexing until I've fixed the rest of the things on the car.  I think it's prudent to fix what I know before tackling things that may devolve into another rabbit hole (like fixing the wipers or having another go at 4 way flashers).
at February 24, 2018