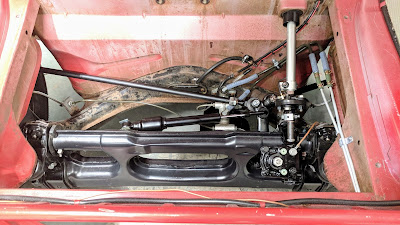 I did two things yesterday: Installed a steering damper and polished the chrome on the front bumper.  The first one makes sense because it moves the project of getting the car functional forward.  The second one accomplishes almost nothing, save for the time spent, and can't really be justified from a time/effort thing.

Today, I followed up with more work to get this car rolling... 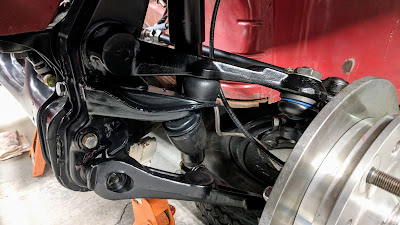 I repacked new bearings in the left hub, cleaned the brake rotors, installed the calipers, snugged up all of the bolts, installed tie rods (adjusters are still loose for tweaking), installed the speedo cable (sort of - it's not clipped on the cap yet), greased the beam at both upper and lower fittings, cleaned up the grease that squirted out at the seals, installed shocks and tightened the ball joints.  I was originally going to use the new ball joints that I'd bought but during the mock up I decided to use the old ones with no real solid reasoning behind it and they just remained when I tightened it all up.  They're fine but a little rusty...if I don't use them now, they'll just sit in the drawer slowly getting more rusty.

I need to adjust the track/alignment a bit before I tighten the tie rods.  I'm also going to try to get the car to turn over with the mechanical fuel pump and see how that goes.  I am eager to hear this car fire up again after so much time sitting idle in the garage.  Once I'm confident that those things are good - I'll move forward to the doors.  I've got 40 days to get this thing done.
at April 13, 2018