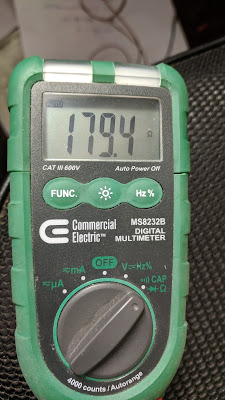 Made another attempt to resolve the horn issue today...and while I didn't resolve the issue, I at least know what's causing it.

I tested the ground at the steering column head on the connection plate to the negative terminal on the battery and found that I've got an issue with the column grounding to the body.  First order of business was to drop the column so it's not attached to the dash by the two mounting bolts to see if it's the mount/bolts or something else.  Once the column was dropped from the dash and the screws removed - the resistance dropped to near zero.  So somewhere in the handful of pieces holding the column head to the dash the column is grounding and causing the problem with my horn relay.  I didn't have enough time to dig into the details of the mount but I should be able to get to it tomorrow and hopefully get it resolved.

Once that's done, I'll probably circle back to the carburetors and see if I can get them dialed in a little bit more.  The local VW mechanic hasn't returned my call so it might be time for me to learn how to fix them myself.  I can't really do much with the doors because the window felt isn't yet in stock so there's little sense in taking it apart again.  I would like to get the doors back together before the move.  I also found an additional distraction today - the rear seat lower panels.  I'm going to pull them out and clean them if/when I get stuck while working on something else.

I'm down to just over 4 weeks before the move...and who knows if the car will stick around until the end.  I'm still working out the transportation piece for Nigel.
at April 18, 2018