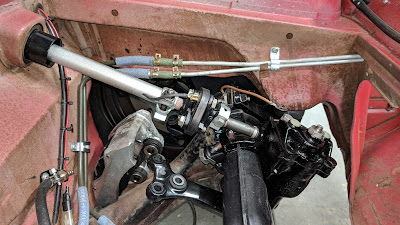 In spite of potentially having the entire day to work on the car, I wound up with a couple of hours, tops.  I decided to tackle the installation of the steering box and connecting it to the steering rod.

Somehow, the ground wire from the front beam to the steering box is about 1/2" too short.  Not sure how this is possible since it was made specifically for that spot but now I'll have to figure out WTF is going on there.

I didn't get to use the newly powder coated pitman arm because I haven't quite figured out how to get the bushing installed.  Instead of being stalled by something that I'm not likely to work out quickly, I decided to use the old pitman arm to get back on track.  Oh well, shit happens...it's time to just get moving.

As far as the front end goes - I think the two sides are even but I guess I won't know until I get it all snugged up and loaded up...it's not that tough to fix if it's uneven.  It looks even when I'm standing in front of it and looking at it.

I'm probably going to be trading my NOS dual circuit master cylinder for some Weber DCNF carbs and manifolds.  It's a good deal so I decided to go for it.  If I get tired of fucking with the IDFs, I'll swap over to the DCNFs which are smaller in size.  If not, I can use them to trade for other parts.  They're a slightly more flexible currency in my opinion so it's hard to lose.
at April 11, 2018