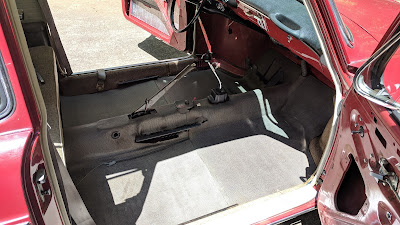 A nice hot day was best put to use by setting the rubber mat in the driveway to make it more pliable.  After 20 minutes, I was able to get it into place.  The floor of the car looks a lot better when it's covered up and it'll be a little quieter. 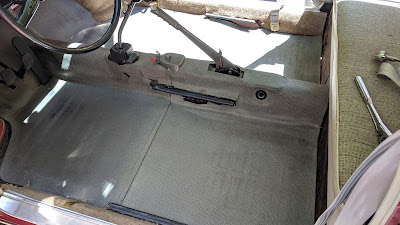 Another perspective of the floor mat in the car.  One definite downside is that it fouls the accelerator pedal assembly because it's not stock.  I'm using the later pedal bearing that's self supporting and does not use the bracket welded to the floor (for a few reasons).  The shifter, which is also not stock, does not sit/fit as well with the floor mat in place.  And I've discovered that, at least when hot, the mat slides around with very little effort. 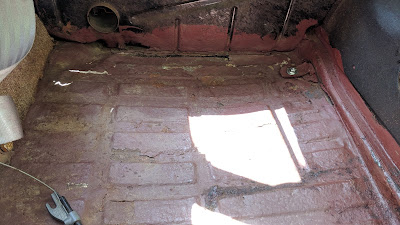 A clear shot of the passenger's side of the car - the floor is riddled with holes and rust through from approximately the same place as the seat rails begin.  I'm not sure if that's going to be covered by the ISP quarter panel replacements or if I'll have to use the pan halves.  I'd prefer to keep the original metal but the rust is ultimately going to make that decision, I suppose. 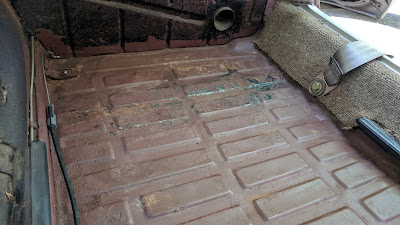 The driver's side is in much better shape (or at least it appears that way).  Once the dust has settled a bit in Illinois, I'd like to pull the body off the pan and restore the pan completely.  I've done the suspension bits so it's 2/3 done.

In other news:  Knowing that I have a remedial level of knowledge of carburetor tuning, I dug up some information about how to do a basic tune on 40 IDF carbs.  After some trial and error, I was able to get them to run pretty nicely (albeit a bit rich).  I took it out for a quick drive and once off the line, it runs strong.  The 'off the line' part stumbles because it's running rich.  I may try to lean them out a bit tomorrow if I have time.  I think I've learned a little about carburetor tuning and accomplished a little along the way.  It'll be nice if I am successful at getting these to work better.

The steering on the car still feels super loose on the front end.  The fuel tank is near empty and the spare tire wasn't in the trunk but it still felt loose for what was there...I may just be biased due to the very flat feeling in my daily driver with AWD and fairly wide tires.

Soon, it'll be time to tackle the doors...I've got 24 days before we move and probably half that before the car is picked up.  The pick up date will be determined in the next day or two.
at April 30, 2018