“Yesterday's weirdness is tomorrow's reason why.” 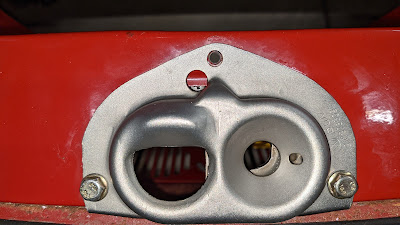 Over the last week, I've screwed around with the hood lock/release trying to get it adjusted well enough to work.  The early hood lock has two pivot points and is, historically, a giant pain in the ass to adjust properly if it's ever messed with/removed.  Well, I fucked up a while back and removed it and it hasn't worked correctly since I took it out.  I've left the spare tire tray out of the car and become some level of proficient at releasing the hood from under the car without a jack.

I have a really nice later version of the hood latch - it's got one pivot point and the later versions are much easier to adjust and get working.  I removed the original and dropped the newer one into place and got two of the three mount bolts in before I noticed that the screw that secures the hood pull wire is obscured under the top plate.  I didn't want to cut the car, so I pulled it back out and screwed around with the original lock until I could get it to work.  Took about an hour but I finally got it.

I swapped out the fuel pump to another style - it wasn't as easy to install and took some fiddling to get it installed but it's in there and working.  I started the car and as I was backing out of the garage, it started pouring rain - so I pulled back into the garage. 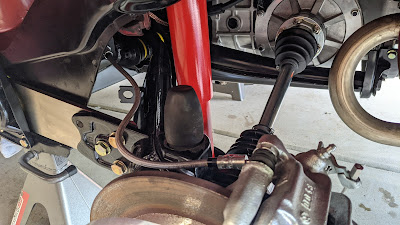 I decided to have a look under the car and have come to the conclusion that I'm not 100% happy with the routing of the brake lines.  They'll do for now but I'm definitely going to get different hoses made and route them around the inside of the shocks - the lines will be at least an inch shorter and it'll be further away from the spring plate.   I don't know what I was thinking with this routing. Iterative improvements and all that...

Tomorrow - I will reset the carburetors, sync them and see if I can get LBI with the new fuel pump.

Next week, I'll be getting a fuel pressure regulator that'll be set to right around 2.5 GPM - I think a slightly lower fuel pressure will work better - Weber carburetors like lower pressure.  And, because I sometimes like to 'learn' the hard way-I bought a replacement Malpassi Filter King because the previous one sat in a drawer for over three years and after deciding I didn't need it - I sold it a few months back.  Experience and knowledge aren't the same thing.

Found new LED bulbs for the side markers - now all of the external lights are LED and they're nice and bright with great color.  I'm very happy with the lighting.