"Your patience will be both appreciated and rewarded" 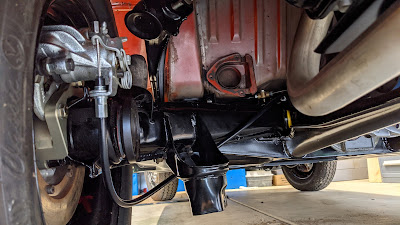 Progress today included tearing apart and rebuilding the driver's side door - the window regulator support has four tiny spot welds - two of them have popped off and they're no longer supporting the arm.  I took the door apart, cleaned everything and dug out the two sets of window regulators I squirreled away some years ago.  After I spent nearly 90 minutes cleaning them up - I discovered that of the two left-side pieces - one was on the verge of self-destruction (the aluminum press fit spring holder/pivot was pulling out of the spring steel bracket) and the other one was broken in the exact same place as the original regulator.  I thought about pulling out the welder but decided against it in the hope that I could simply make progress elsewhere.  So I put the door back together and moved on to something else.  The window works okay - it doesn't bind - but I know it's not 100%.  I'll have to save this for another day.

The other progress includes - the left side fender is back on the car - the left side parking brake cable is installed, I've ordered Koni Red shocks for the rear and the clutch is adjusted.  I prepped the right side of the car for under fender paint and started working on the passenger's side door.  But that's where I stopped.  I then took a VW break and installed the new horns in the Volvo (success!) and broke the headlamp washer door in the process - they're made from the world's cheapest plastic because they break VERY easily.  I knew I should have bought both of them two years ago...oh well, one step closer, I suppose.  I'll have to get the little door thing on order with Volvo on Tuesday since the part number on the part seems to have been superseded and the new part number is a closely held secret.

I'll wrap up the inner fender paint and the passenger's side door over the next couple of days - along with the right side fender going back on the car (and perhaps the bumper!).  Once I can get the parking brakes are worked out, the floor mat can go back into the car (the rear half).  When the brakes are successfully bled, the front floor mat piece can go in the car as well.  Then the seats and holy shit, it'll look like a car again.  Just in time for snow, probably.

That reminds me...I wonder where those axles are that I ordered from Sway A Way several weeks (actually, a couple of months) ago...they were on backorder but I figured they'd show up by now.  Axles and CVs are something I definitely don't want to do twice.  If the back order isn't filled soon - I'll probably have to order EMPI axles and hope they don't suck.