Expectation is the mother of all frustration.

Very little progress coupled with a healthy dose of stasis.

The rear seals have both been replaced but something is still leaking.  I waited a full 24 hours before replacing the seals-letting the excess gear oil drain out (the garage smells great, btw).

I installed the plastic on the driver's side door and the door panels...but not before I cracked the top one in half.  And I lost one of the screws and one of the white caps.  While sitting in one place without moving.  And the replacement Z arm rest is bent...which I didn't notice until it was installed.  I lost two of the washers while attempting to line up the crooked Z arm rest on the mounting holes.  And then, to top it all off the top plastic trim is broken.  I figured that out when the two right clips wouldn't seat.  After screwing with it for a few minutes I realized that it's not the clips, it's the plastic.  And I forgot to put the spring over the regulator shaft before installing the top trim panel.  It's been a great night overall.  The car is still up on jack stands, the garage reeks and I've added quite a few broken parts to my collection.  More NOS parts to the rescue! 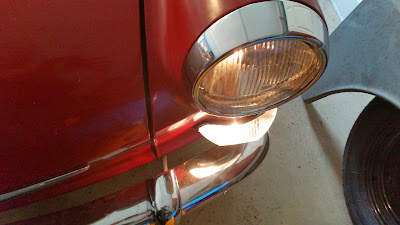 I'm pretty sure there's a ground issue in the car somewhere which is causing my lighting issue.  The only problems I have are the front turn indicators and headlights.  Everything else is working just fine.  I checked all of the wiring against the wiring diagram and it's all wired exactly to the wiring diagram and it all powers up-it's just not very bright or consistent (which is why I think it's a ground issue).  The front indicators are backward-no matter how I wire them-the running light is SUPERFUCKINGBRIGHT while the turn indicator is super dim-so dim that you don't notice the turn indicator is on when the running lights are on as well.  So the choices are to A) Chase down the problem while swearing in five languages or B) convert the car to 12 volt which will force me to look at each and every connection, bulb and wire along the way.  Never mind the fact that 12 volt batteries are cheaper, bulbs are easier to find and there's some serious convenience in having every car in the house running the same system.  In addition to all of that, either the 6 volt battery died or my battery charger died.  The battery wouldn't charge beyond 6.3 volts and the charger shut down on its own after a few attempts to start the car.  So even if I get the axle seal issue solved, I still have to start the car.

At this point, I don't think this car is going to make the short trek to the local VW show.  The rate of issues/time I have to work on it/days before the show = slim chance.
at August 18, 2014