“Know that everything is in perfect order whether you understand it or not.”

A little more tweaking and the leaks have stopped.  The plan is to check after work today and then put the rear brakes back on the car, time permitting.  Final bleed on the brakes and back on the ground he goes.

The alignment needs to be set and the wheels need to be balanced.  Other than that, things should be in decent shape once I get the engine to turn over...I've got a few ideas to execute before I throw my hands up in the air and admit defeat.

I ordered the missing parts to do my 12 volt conversion.  I posted a question about the pushbutton assembly on The Samba and it appears that with very minor modification, the conversion should work just fine.  I find that to be good news as I was under the impression that the pushbutton assembly wouldn't dig the conversion (although I'll admit I didn't really know why it couldn't work).

The ground issue is going to need some attention so I'm also going to start looking for the obvious issues first and hope I stumble across the problem more early on than late in the game, so to speak.

Received some parts in the mail yesterday: 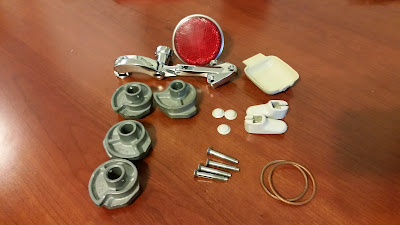