“Man is condemned to be free; because once thrown into the world, he is responsible for everything he does.” 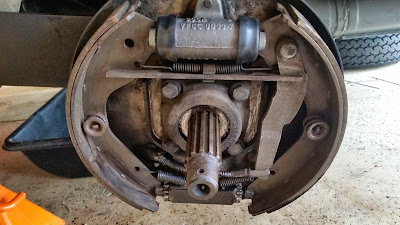 Replaced both rear wheel cylinders with new TRW/Brazilian wheel cylinders, pulled and cleaned the adjusters since they were stuck and started the process of putting the rear end back together....then the next thing happened. 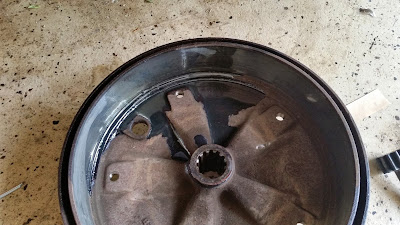 The driver's side axle started dripping gear oil from the transmission.  The axle boots don't leak but the rear axle seals sure do!  I was just at the point of torquing down the axle nuts when I noticed some fluid seeping out of the adjustment hole...turned out to be gear oil.

"Well, that's just fucking great!"  was my comment as I stood up and ended the work.  I've got to get this car back together as it's in the middle of the garage...and I refuse to be defeated by a car.

Two times in a row now...15-20 minutes from finishing up the car and putting gas in it and something else goes wrong.

I'm starting to think that this car doesn't want to go back together.

I left the car alone, ran some errands and returned to find that the passenger's side is now leaking as well...it's possible that I overfilled the trans gear oil but I didn't put that much in (less than 1/2 qt) and I know that the car lost at least that much when the old boots were in place.

I returned to finish installing the seat belts and figure out why the turn signals on the front of the car are so dim.  I checked the wiring and grounds to the fixtures and found nothing wrong-everything matches the wiring diagram.  In one replacement of the headlight assembly, I shorted out the contact so the fuse burned.

Then I promptly did it again.


Stuff that actually got done today:

I'm off to read up on the rear axle seal replacement process...it's not terribly hard, if I remember correctly, although none of this has been 'hard', per se.  There's an element of challenge to replace the current broken thing without creating a newly broken thing in the process.

If the gear oil was overfilled, the extra fluid will leak out overnight and I can prop up the axles with more jack stands and replace the seals-preventing a ton more from leaking out during the swap.  I've got extra cover plates so I'll build them up and just prep for a swap-hoping that it all goes well.
at August 16, 2014