I have no special talent. I am only passionately curious.

After yesterday's setback with the brakes and lacking the 46mm wrench to tighten the muffler nuts, I decided to spend some time today working on things that would yield a more positive result. 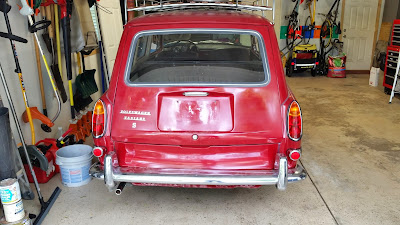 I mounted the rear reflector housings and reflectors.  Turns out that the little picks I bought at the FLAPS worked great for pulling the seal out from behind the housing. 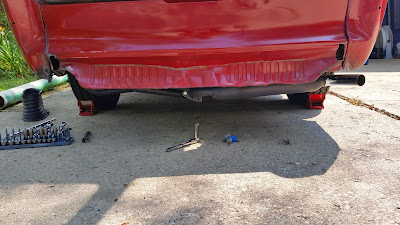 One nice distraction with the rear bumper being mounted is that I can't see just how jacked up the rear apron is...I know it's there though.

I also mounted the chrome trim piece on the muffler pipe.  It felt good to open up that NOS package and put the part to use.

Also nice to see the exhaust exiting on the proper side of the vehicle. 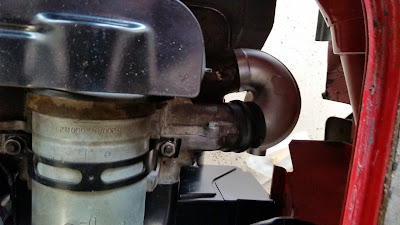 Found some short elbows since I'm using a later muffler.  They're the wrong color but they're correct for the muffler.  Downside is that I have to block off the fresh air pipes at the end since the car has early tin (64) and there wasn't a provision for the preheat pipe until 1965.  I think I'm going to buy some pinch clamps for the rubber connector for now.  I have NOS bands but want to hang on to those until I mount the correct muffler. 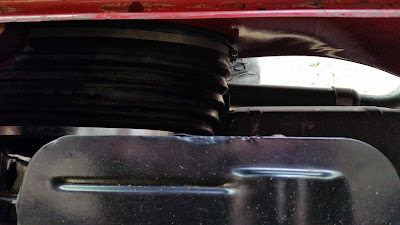 Mounted a new bellows boot with NOS band clamps.  It's amazing how much easier it is to put correct parts on the car vs. fighting with aftermarket shit that doesn't fit properly.

I bought a small spool of wire for the tach but didn't get it installed as of now.

Two orders will go in today for parts needed to finish the brakes and the muffler install (clamps).

I didn't do anything with the interior or the seat belts.  The rubber floor mat is super brittle and that leaves me with no where to mount 1/3 of the front seat belts.  I've already decided that I'm going to have a seat belt mount welded to the rocker when the car is prepped for paint because I don't want to put a weird hole in the floor (not to mention the inherent weaknesses of the floor for a seat belt mount).

I've got some investigation due for the rear seat and seat belts.  I've got too many rear seats so I plan to go through what I have and keep three at the most.  I think I have five rear seats right now.  It's just time to thin the piles to a respectable level.

I hope to keep the work level going and get a few things done during the week...although I'm at the figurative mercy of the many people from whom I've ordered parts.

Found the original 67 only supply tube from reservoir to master cylinder, original German style hose in the larger 7mm size (supply tube is 8mm, IIRC), and I'm waiting to receive a repop 67 Type 1 dual reservoir.  I know the cap will fit and I'm hoping that the pipes that come from the bottom are similar enough that I can use them on the Type 3 reservoir.  If not, I may temporarily rig up the Type 1 part so that I can get the brakes back to fully functional until the proper part is located.  I've got my 'feelers' out there looking for the correct parts...but they never seem to show up right when they're needed.  I'll find a solution-it's just a matter of time.
at August 03, 2014