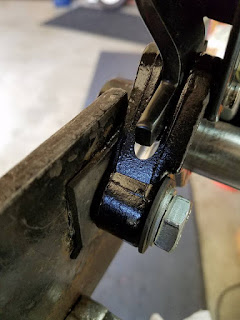 A happy bit of timing happened yesterday...while thinking about the best way of dealing with the clutch cable 'hang' on the heim link system and the desire to change the bearing bracket - I came across a post by Pedal Werks (Scott Stuart) on Facebook...Scott rebuilt my pedal assembly a few years back and I converted to the Classic Bug Parts X-Celerator Speed Wheel a while back after receiving the rebuilt pedals.

For a couple of weeks, I was trying to figure out why the car wouldn't accelerate as well as I would have expected...turns out that the bearing bracket needs a small modification to allow for 'full throttle'.  I thought about making the simple modification myself but then remembered that I want to swap to the late bearing bracket to eliminate the floor-mounted bracket when the new pans are installed.  And I have a bag full of brake pedals to get rid of...and I wanted the Classic Bug Parts Clutch Pedal Shaft Upgrade to be drilled/tapped to 1/4-20 in the event I can't figure out the weird hang issue on the heim link.

I wound up calling Scott and we chatted briefly about the items I wanted to address - he mentioned that the heim link lever would sometimes hang on the bearing bracket and would require minor grinding...and I suddenly realized that the 'hang' is probably the clutch lever bracket rubbing the bearing bracket.  In the end, I wound up shipping it all back to Scott to complete the work and send it back when he's done.  This will also buy me some time to finish the brakes (and remove a distraction). 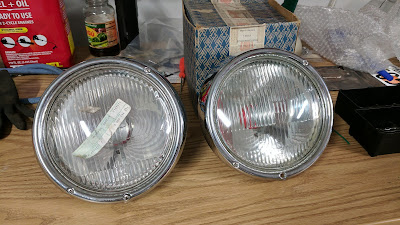 I received the NOS Hella headlamps yesterday - they're a slightly earlier version of the lights on the car and the lenses are different as well.  They are in very nice condition and will be a good addition to my collection of parts that are highly unlikely to be used.

I also scored a 67 only brake fluid reservoir dirt cheap from a car being parted out in the US, a random assortment of parts coming from Sweden and a few NOS parts from Germany.

Once I get the brake system sealed back up, I want to roll the car outside and give it a proper wash - sort out leaks and figure out which seals to replace sooner vs. later.  I also think it's high time the car get washed and waxed so the dust has a better place to land.
at April 04, 2017