Jack and Jill went up the hill to fetch a pail of water... 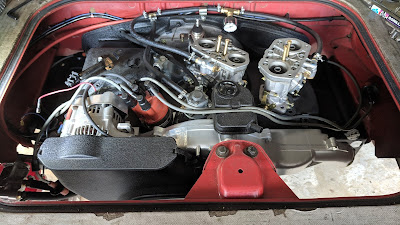 In preparation for the new exhaust system, I wanted to make sure that the plugs weren't fouled.

That's how I got here.  In order to get to the plugs on this engine, the carbs and manifolds have to be removed, then the eyeglass tins and, finally, the plugs.  Funny part is that I didn't even get the plugs out because I ran out of time. Tomorrow is another day. 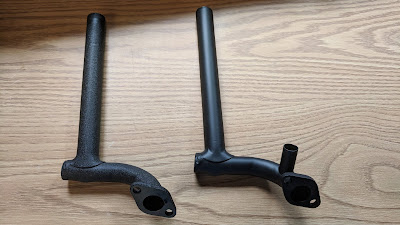 I swapped over from the early oil fill tube to the late oil fill tube - primarily to mate up the 'road draft tube' with the oil fill - which ensures that any oil that makes it past the breather will wind up back in the engine instead of all over the bottom of the engine/fan shroud. 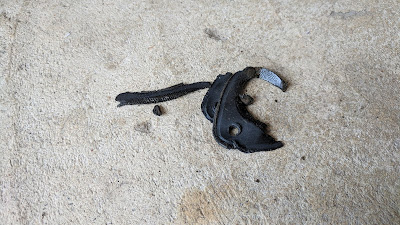 This is what remains of the seal for the oil filler thing...I should probably know what it's called. 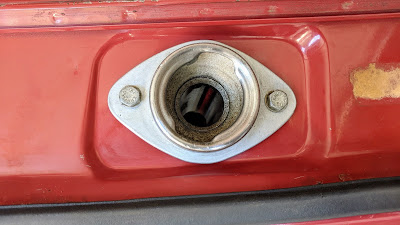 The distraction was completed - cleaned up the oil fill / dipstick holder bit (brb - have to go look up what this thing is called...)

Well, it got cleaned up, the gasket was replaced and the whole thing was put back on the car.

I've got several quotes for replacing the pans and I'm going to go with one of them here once the IRS conversion is set to take place.  The plan is to also modify the pan so that I'll have 3 point seat belts up front (real auto retracting ones) and I want to move the rear brake "T" slightly to eliminate a bend that seems to serve no real purpose other than to make it a real bitch to install the brake line.  I'm also going to have the fuel line in the tunnel replaced with a new line since the front end is pretty close to being toast.  All that's left to decide is if I want to use a bed liner on the bottom of the pan and what I want done with the inside of the pan (paint or ?).  I don't want bed liner on the whole thing so I have to figure that out rather soon.  I'm looking forward to putting some of these parts that I've been hauling all over the country to use!  I'll have to try REALLY hard to prevent scope creep - these cars come apart really easy.

The proposed build up of the IRS conversion - barring anything odd - is going to happen in a couple of months.  I'm waiting on a part from CSP to convert the rear disc kit from swing axle to IRS.  In the meantime, I've sold off a lot of the swing axle bits and those funds will go toward funding the IRS conversion.  While the engine is out during the IRS conversion, I'm going to swap out the tins for better condition original tins without the wrinkle finish on them - it shouldn't bother me because it's such a minor thing - but it bothers me.  I've got some nice original tins that can be put to use and the wrinkle finish stuff can go to a new home.

I'm trying my hardest to keep the motivation up and get this car on the road - let's see what I can carry down from that hill better than Jack and Jill.
at June 28, 2018