Experience is what you get... 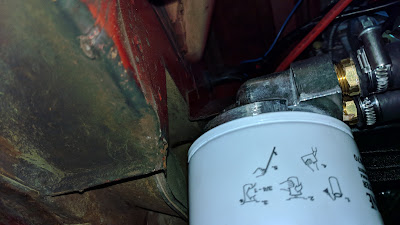 After dropping the engine and doing another text message brainstorming session, I managed to get the engine in the car.

The relocation of the bracket for the oil filter seems to be good - it's barely not touching anything. 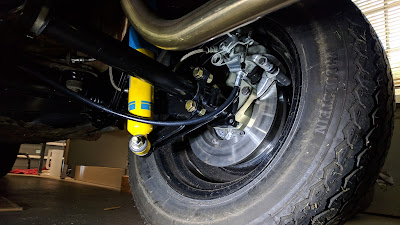 While I was filling the transmission with gear oil, I looked at the bottom of the hubs and noticed that both of the o-rings are crushed and out of the space they're supposed to occupy.

So, I get to pull the hubs and try again.  Good thing I didn't torque the axle nuts down yet. 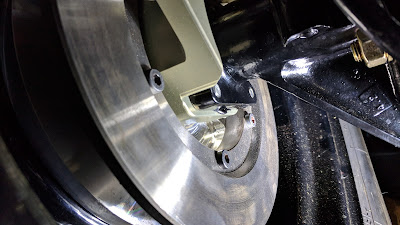 Here's the other side - makes the need for removing the hubs much more apparent.

Once I noticed this, I stopped pumping oil into the transmission, sighed, said "fuck" and got out from under the car.

One day, I'm going to win, but that won't be today. 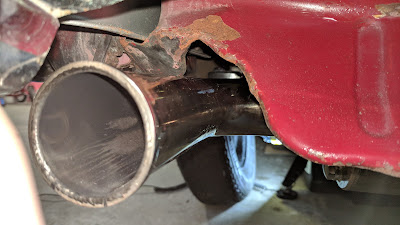 I installed the exhaust but it is fouling the rear apron - granted the rear apron is already super fucked up but this will make noise rubbing together when the engine is started so a remedy needs to be found.  I'll probably loosen the whole thing and try to center it a little better.  I think better/different hardware is going to be needed though - the stuff VS uses is garbage.  In the event there's not enough adjustment left, I'll find a local shop that can weld stainless and have them modify it so that it fits properly.

Just another few things to add to the list of stuff to deal with before I turn the key.

The shocks are installed, I connected the alternator wiring, reoriented the oil pressure switch so the wire would reach it, and I started to fill the transmission with oil (which will now leak out when I pull the hubs) but I've run out of time for today.  I'll try again tomorrow.

Once I'm done monkey fucking around with this stuff, I'll install the camber stop, the sled tins and the industrial tins - I'm saving that for dead last because it's a lot easier to work on things without those parts installed.
at October 18, 2017