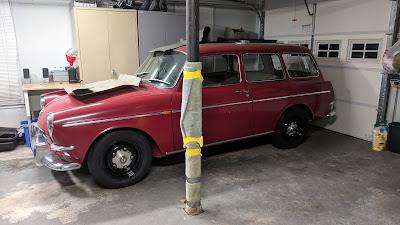 A little bit ahead of schedule - I got the electric fuel pump installed and started the car.

I didn't drive it anywhere because I skipped the brake bleeding process to get the car started...so I'll return to the brakes tomorrow morning.

I have a few other things to get back on the car before I can drive it.  I still expect to be able to drive the car tomorrow. 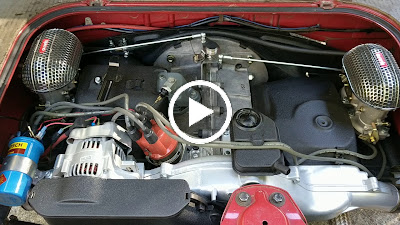 A very short video of the functional engine.  Not terribly exciting but here it is.

I received a few of my wayward parts via UPS/FedEx and USPS today...I found thinner axle flange gaskets without looking for them via FCP Euro.  If I'd had them when I was doing the axles, I could have used two gaskets per side.  The axles will loosen up a little through use and I'm not terribly concerned at this point.

I've also decided to remove the camber compensator because the way it's designed doesn't make any sense - it'll eventually shift slightly and just bash into its other half, making all kinds of noise and eventually damaging itself.  I may, at a later date, alter the design slightly, or just run without one.

It'll be nice to take this car out for a drive once it's all dialed in...then I'll get to start working on minor upgrades - like real seatbelts for the front and rear seats.
at October 26, 2017