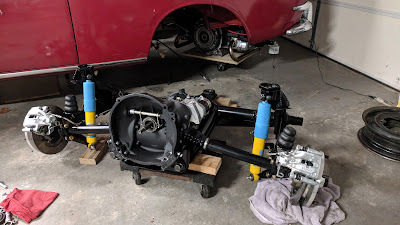 I had a couple of hours tonight and figured I'd see if I could pull the sub frame with the engine.  After removing all of the hardware holding it in place and lowering it on the wheels, removing the exhaust and jacking up the car - I realized that it wasn't coming out in one piece for two reasons.  Reason #1: I was using the jack at one of the locations I'd need a jack stand.  Reason #2: I wouldn't be able to jack the car up high enough to remove the complete sub frame - even if I removed the wheels and put the rotors on plywood.  So I moved on to an alternate plan.  After 20 minutes of wrestling with the now loose sub frame/transmission/engine combo, I got the engine free of the transmission and rested it on a cart.  The idea was that I could leave the engine under the car and work the sub frame out around the engine and the body...sounds a lot easier than it actually was and I'm not sure I'd do it that way again.  I've learned quite a bit about how not to do things the next time around by working on this car.

Not quite back to square 1 but this is a substantial step backward nonetheless.  I'm saving the rest of this for Monday.  I hope I can get the nose cone and hockey stick swapped without removing the axles from the spring plates but I'll cross that bridge when I get to it.

I may also try to test out the 71 fuse box again - I did a test fit of the relays and they all fit in it so I'm hoping that I can figure out how to make it work - I think it'll clean up the underside of the dash quite a bit and give me a good place to mount the relays without making more holes in the body.

I've also worked out a headlight upgrade and a potential solution for music if/when I get to that point with my car...I think it's a bit premature because I'm a couple of years out on music/restoration.
at October 21, 2017