The return of productivity... 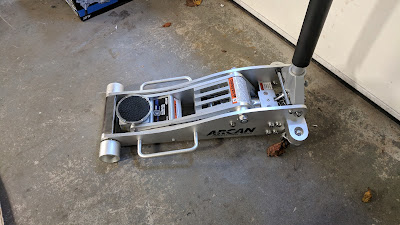 Started off the morning by going out to a local fastener shop and trying to procure the pieces I need...I was about 75% successful.  Successful enough that I was able to keep going.

A few miles down the road, I went to Northern Tool and bought this new jack.  It's about twice the size of the old jack and lifts higher (which helped a LOT later in the day). 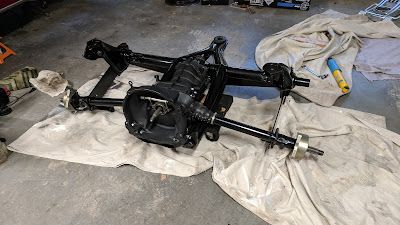 Got the hockey stick swapped, nose cone installed and mounted up to the sub frame.  At the point when I took this picture, I hadn't connected the axles to the spring plates because I wanted to be 100% sure that the shifting issue was resolved.  Once the subframe was installed and I could find all 5 gears, I proceeded with the rest of my installation work.

I wound up having to remove the shocks because they were getting in the way. 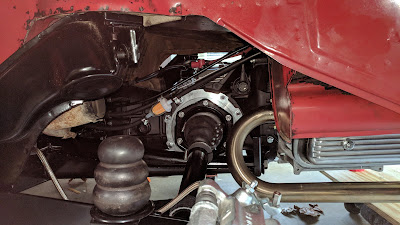 This is where the day ended - hockey stick swapped, nose cone installed, transmission installed in the subframe - which was then mounted to the pan, installed the engine, connected cables, wires, etc.

I have to install the exhaust, adjust the clutch cable, tighten the axle nuts, add more gear oil (coming tomorrow), adjust the parking brake and a few other little things. 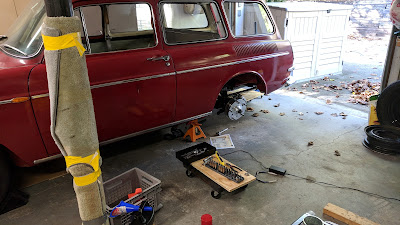 Sure doesn't look like much but there's a lot of progress in this picture.  Having two jacks helped a lot with getting things back to where they belong.  I may try to rebuild the HF jack when I run out of other stuff to do because it's a good size and works well with the furniture carts that I have.

I will probably put the rubber mats back in the car since they didn't sell and I likely cannot ship them to anyone.  They'll go back in once I'm 100% sure I'm done screwing around with anything that would involve removing them. 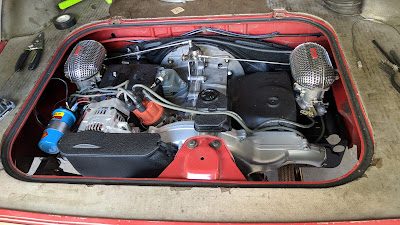 I was able to shift the engine slightly to the right and get a tiny bit more clearance for the left hand carburetor air filter.

I am going to need to source some custom plug wires with 90º boots to replace the bug wires that were installed on my engine by the builder.  I've also begun the search for some nice original Webers to replace these clones. 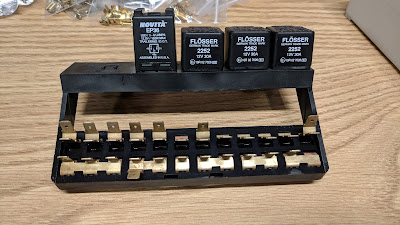 I cleaned up the 71 only fuse box with metal cleaner and vinegar, then rinsed it in water and dried it out.

I have a few pieces to acquire before I can swap the fuse box so I'm going to back burner this one until I've got the other stuff worked out.

Tomorrow is a short day for working on the car but I'm going to try to get the fuel pump mount finished and prepared for install.  I'm going to have to paint it so I don't think it'll get installed but I've got plenty of other things to do to work around it.