note to self: stop expecting 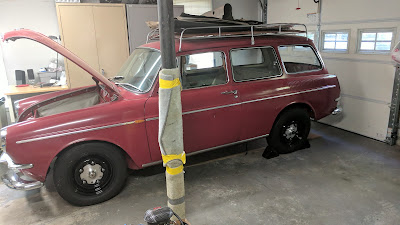 I made a little progress today - the photo would lead one to believe I made more progress.

I swapped out the rusty front left turn indicator housing with a newer one.  That took about 15 minutes in spite of the missing tab on the housing.  I hope it holds for a while so I don't have to do it again soon.

The rear end was a bit more challenging - I spent over an hour trying to get the shift coupling cover and seal into place...turns out the seal should be installed before the sub frame because the top part of the seal goes OVER the top of the nose cone seal.  So, most of the seal is installed correctly - I'm in no mood to drop the whole sub frame to fix the seal - if the past is any indication, I won't drive this car very much anyway.  Why VW decided to put this under the car within a tiny triangle of the sub frame is beyond me.  They should have remained consistent with the Beetle and made the access panel INSIDE under the rear seat.  Yeah, the VIN is stamped in about the same place as that cover plate would be but seriously...makes no fucking sense.

The hubs are installed (obviously) and I hand torqued the castle nuts - none of the brakes are installed yet.  My back started to indicate that it was done with this process so I stopped before I spend the next week regretting what I've done.  There's always tomorrow.

I found and bought the second sun visor - it'll show up after I have forgotten that I bought it because it's coming from Germany via USPS - which means there's also a good chance my local post office will simply not deliver it.

I have yet to tackle the front fuel pump mounting bracket business...I imagine I can get to that this week.  Perhaps I'll have this car started by the end of the month.  My passion for this hobby is fading so it might sit for a while.  It's on tires and will roll if need be...the rest of this shit will happen as both my enthusiasm and physical self will propel me.
at October 16, 2017