...when you didn't get what you wanted 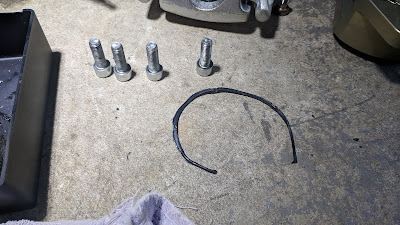 Started the day off with great productivity - pulled both rear brake hubs, removed the damaged o-rings, replaced them with new ones, ensured that they were not being crushed and put it back together.

Filled the transmission with oil, hooked up the parking brakes, finished the axle boot installation, installed the bellows boot, cleaned up some wiring in the engine bay, installed the tachometer, started making the bracket for the fuel pump and installed the shifter.

I tried to run the transmission through the gears to align the shifter properly and immediately noticed that something was 'off'.  I could find 3rd and 4th but nothing else.  I ran out of time to work on the car but later contacted a local VW friend to ask if there was anything I may have forgotten or need to check...then the topic of hockey sticks came up.  Turns out there are two different styles of hockey stick - I honestly had no clue.  I couldn't figure out why this would matter on a late/non-stock transmission but then the topic of the change in the tunnel (removal of the center heat tube) potentially changing the geometry of the shift rod turned on the light in my head.  What the fuck... 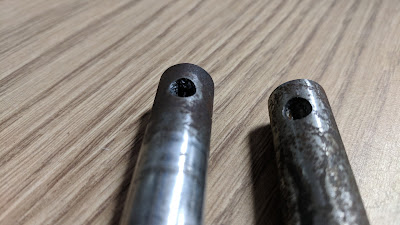 Early Type 3 hockey stick on the left (113 311 541 A) - goes until end of April 1964 production - aligning with many changes for the Type 3.  One thought is that when the center tunnel heat tube came out, the shift rod geometry changed...and so did the angle of the divot for the coupler.

If you look real hard, you can just barely tell the difference in where the holes are drilled. 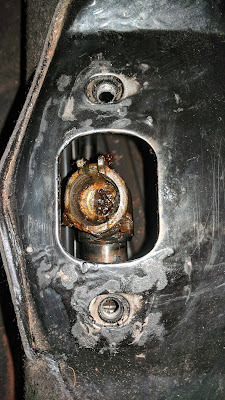 This photo was used to confirm with a local VW friend that my transmission has the wrong hockey stick.

So...I'm going to undo quite a bit of what I did today and pull the whole rear subframe so I can swap out the hockey stick.  I guess I can fix my half-ass coupler seal installation.  The plan is to pull the whole thing, sans tires, if I can get the ass end of the car high enough.  I have a wheeled dolly that I used to pull the 1500 and I'm hoping to replicate that maneuver.  The less I have to move it around, the happier my back will be in the end.