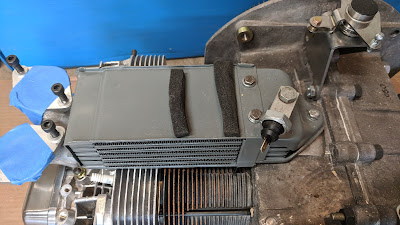 The left side tin was removed today prior to the engine being picked up.  Now, perhaps I'm expecting too much, but this isn't the way the foam is supposed to be installed on a Type 3 engine. 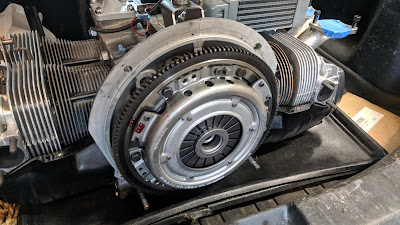 Lightweight flywheel (probably Chinese) that will be replaced with a stock flywheel.  I'm not going to drag race so the faster drop in RPMs serves no purpose - other than to make the car slightly harder to drive on the street.

Before the engine went on its way - We pulled on the flywheel and pushed it back to see if there was any 'audible' end play - and sure enough, there's an audible clunk that shouldn't be present.  The end play was later checked and it's out of spec.  I'm sure this won't be the first thing that's incorrect that will be found.  The accumulation of issues will determine how far I can get with what's planned. 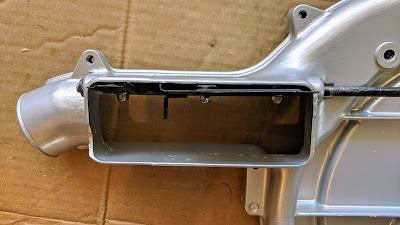 I pulled the flaps apart and replaced the rubber grommet in the center mount and replaced all of the hardware (and oriented it properly upon installation).

As shown in this picture - the flaps now open fully (and properly contact the rubber grommet in the flap with the fan shroud). 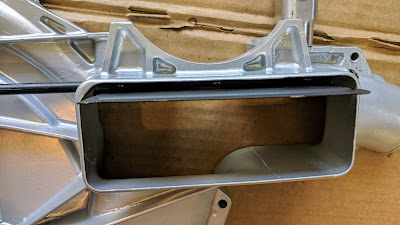 Additionally, I replaced the factory 'dent' in the right side flap to allow it to open properly.

Flaps are installed, work properly and this thing is ready to go back on the engine.

I was initially going to eliminate the flaps and thermostat system but, listening to that little voice, I'm going to use them.  If they're a problem, I'll remove the flaps and leave the rod. 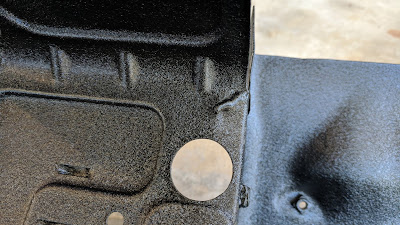 In addition to the backward flaps, lack of thermostat spring (which led to the flap rod falling off), and the mutilated crank bolt, the engine tins are booger welded and powder coated with wrinkle finish.  I'm guessing that the wrinkle finish is chosen to hide flaws in the tins and disguise the booger welds. 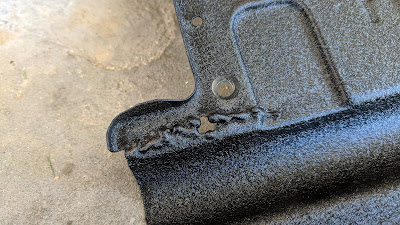 The quality of this weld speaks for itself.  I've dug out some better condition used tin that will be powder coated in black - not wrinkle black. 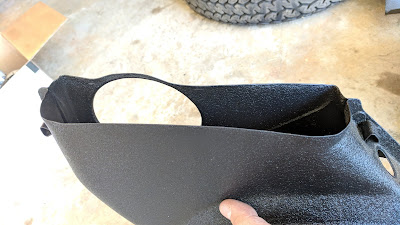 The pulley shroud top has been a real hassle to get clipped on to the shroud because it's so deformed.  I dug through my tin stash and found another one that I'm going to send out for powder coating and sell (or attempt to) this one.

The next few days will be interesting as the engine is torn down and I'm provided with the results of what was used inside.
at July 10, 2018