“Somebody took my actual physical presence away and substituted this” 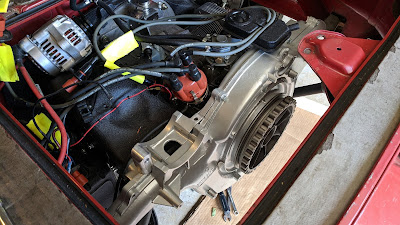 After spending a decent amount of time under the car trying to find a suitable place for the oil filter, I decided to pull the exhaust and get to the business of removing the hanger bar.  I can't use it because of the position of it with the exhaust and it interferes with any possible alternate locations. 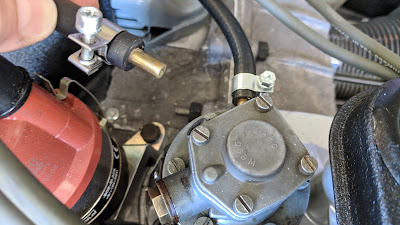 Very soon after getting going, I bumped the fuel pump and the fuel pipe just fell out of the pump.  I think it's time to find a way to get a threaded barb on both ends and possibly re-route the lines a little.  These things are, in my opinion, designed to fail. 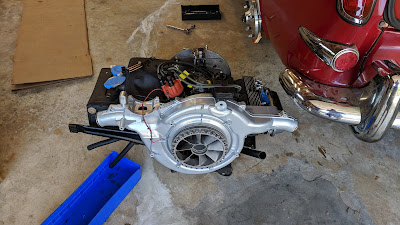 Wound up taking the engine out because I couldn't get my tools up in the engine bay to get to the crank nut.  Next easiest way to do it is remove the engine, put the flywheel lock on it and remove it. 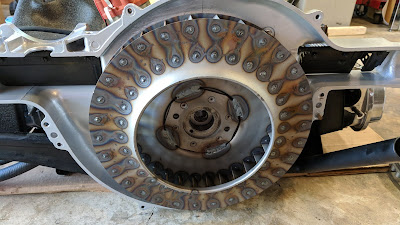 Nice to see that the welded fan I paid for is in the engine - no way to tell if it's balanced though. 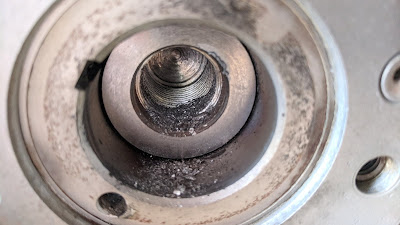 I expected a fight to get the crank bolt off but after maybe two revolutions, I nearly threw the cheater bar across the garage...when the pulley and the bolt fell to the floor and I noticed what I had - I just started laughing at the sheer fucking reality of it all.  I noticed the metal dust shavings in the crank first, then I noticed the bolt on the floor.

I was told that there are Chinese cranks on the market that are so hard that they're a real bitch to machine and they're apparently known for eating crank bolts if the bolts are not installed properly.  Guess what? 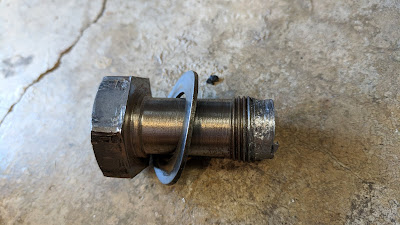 The crank bolt is missing half of the threads!  That would not have been a fun failure to experience on the road far from home.  AAA or not, that still makes for a miserable experience.

The suspicion is that the crank bolt was both started and finished with an impact - three to four threads survived.

Red flags all over this engine...not money well spent, unfortunately. 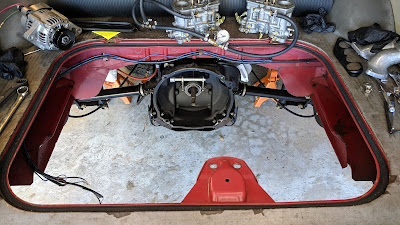 This is likely the beginning of the process to split the body and pan - pushing the pan replacement up to the top of the job board and moving forward with the IRS conversion.  I've got the time so I may as well put it to good use.  I just hope I don't find any sinister shit on the body when it comes off the pan. 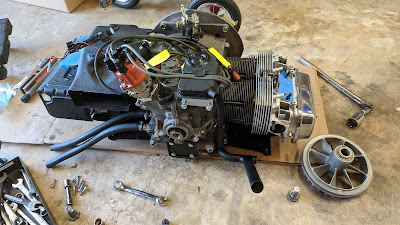 The engine is now sitting on the floor.  I went over to a local guy's house and borrowed his Matra fan puller.

We chatted briefly about the current situation and determined that it's money well spent to have him go through the entire engine, document EVERYTHING and replace anything that's wrong or broken and balance the rotating assembly.  I'm hoping he doesn't find much but I won't be even the smallest bit surprised if a crank bolt is the first of a few fucked parts.  He's not likely to get to it until August...that's the next two months of cruising down the toilet.  But it does beat sitting on the side of the road because the engine shit the bed... 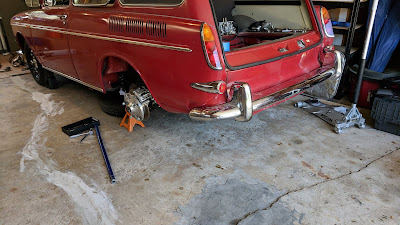 This is Nigel in what is apparently his 'happy place' - up on jack stands in the garage - not out in the 'real world' getting dirty and driving around.

The pan removal process will pick back up tomorrow.
at July 02, 2018