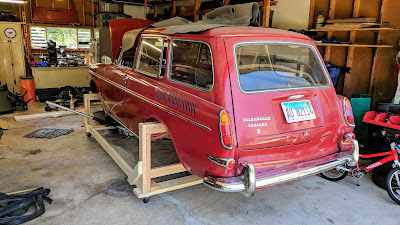 Today's goal was to build the body cart, get the body on the cart and drop the pan.

I was able to cheat slightly - my kid wanted to build something and it was just too perfect so we cut all of the pieces and built a large part of the cart the previous evening.

All I had to do today was install the caster wheels and figure out how to get the body on it without destroying my back or having the car fall on me.  When you have to do stuff solo, you get creative...sparing any incriminating details, the body made it on the cart, I'm fine and there are no pictures of the process. 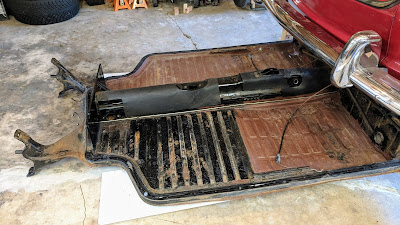 I used a couple of extra shelving pieces to make ramps to slide the pan out from under the body.

Next step was to remove everything from the pan, bag and tag it and get it ready for transport.  I spent the better part of an hour scraping all of the tar board off of the pan and tunnel, removing heater system cables and all of the remaining brake lines and related grommets. 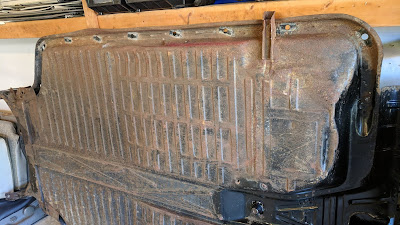 Having a place to store the pan that wouldn't also double as a hazard to the kid meant that I'd spend the better part of three hours rearranging the garage to store everything so that it might no get moved around much but still be ready to be installed when the time comes.

I took several pictures of the bottom of the pan but, for some reason, none of the top side.  It's also at this time that I realized that I forgot to remove the shift rod - so that's going to have to come out before it goes off for work. 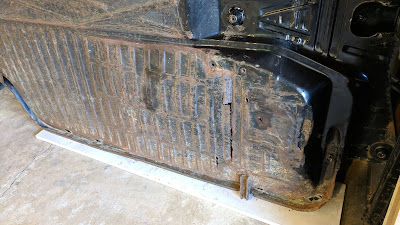 Once I got this thing off of the body - I looked it over to determine if I should reconsider the quarter pan idea.  The front area is pretty decent and only the passenger's side rear area is bad - but the whole thing is dented/creased to shit from all of the dirt roads this car has likely seen in the early parts of its life.  Up near the front heater outlet, there's a slight crease in the floor that's about 18" long - among a handful of other areas. 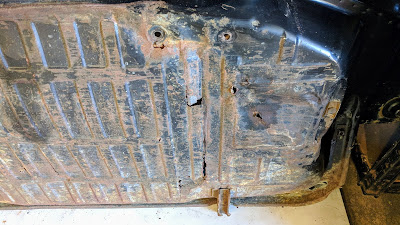 The passenger's side rear seat foot well and battery area are mostly Swiss cheese and barely together.

Full pans it is...now I have to decide if I'm reinstalling jack points and then find some.

I've now got the weekend to relax and figure out what the next steps will be going forward.
at July 06, 2018