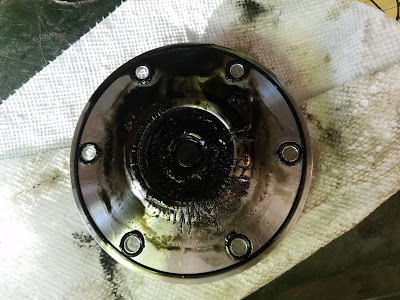 The engine was picked up today and a few hours later, I received the following text (and the picture to the left):

The bottom line is that this engine has so many problems due to poor assembly and inexpensive parts that very little will be able to be re-used.

Carbs:  Should be fine with re-jetting

Heads:  These are AA 043 basic heads with 40 mm intakes and 35.5 mm exhaust, and single HD springs.  These have not been ported,  so the exhaust port where it meets the header is only about 1 1/4 inches

Compression ratio:  Approximately 8.9 to 1.  Lots of heat.  The builder cheated by putting in large spacers just to get  .040 deck.  AA cylinders have very little that slips into the case anyway.  The deck should be about .070.

Lash caps:  When I took off the solid shaft rocker assemblies, the lash caps fell right off.  Because everyone is using stainless steel valves, you have to use either lash caps or swivel foot rockers.

Sealants:  RTV was used to seal the case halves.  This material is too "fat" and does not allow the proper bearing crush.

Flywheel: A 12 or 13 pound lightened unit that makes around town driving a pain.

Metal in the sump:  There are long filings of metal in the sump plate that could be picked up by a magnet.  This usually means that cam/lifters have already gone flat.  I can assume this because there was an extreme amount of clearance between the end of the rocker arm adjusters and the valve.

There's a part of me that refuses to be defeated by this car and there's another part of me that just wants the fuck out.  It's at a point now that my wife (who largely avoids getting involved in my hobby or commenting) has asked me if I'd rather sell the car.  Hard to do now that it's in pieces in the garage waiting for work to be done.

Tomorrow is the day the case comes apart and the worst will be revealed.
at July 10, 2018