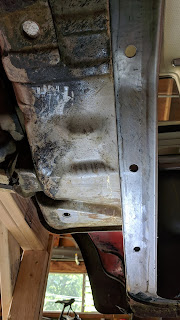 I spent a little time under the car removing the sealant from the pan seal - I'm VERY happy about the condition of the underside of the car.  It's super clean with some minor dents.  Most of the undercoating in this picture is now gone.

I hung the Python exhaust hoping to find some inspiration in where to mount the remote oil filter and have, so far, come up with nothing new.  I may very well have to use one of those exhaust hanger deals with some sort of extension to get it away from the engine a bit more.

A conversation was had yesterday with the original engine builder - he's confirmed that he's got all of the parts with the exception of the stock flywheel - should have that and the other rotating parts over to balance on Monday and the entire group should ship next week.  I continue to document everything and remain skeptical but optimistic, if that is a thing. 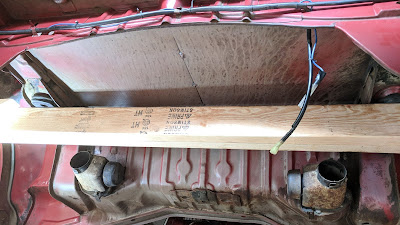 I really wish I could just take the rest of the car apart and do the body work and paint - but the timing isn't good...on the other side of the coin - I should be able to drive this car in September with a good engine, trans and fully finished pan.

I'm on the hunt for a replacement piece for the plastic tab on the seat release mechanism at the door - the driver's side door piece broke off a while back and it's now allowing the door lever to dig into the bottom of the door.  I may go to the local hardware store and see if I can find something that'll work here.

I have NOS levers but don't really want to install them until the car is painted.
at July 26, 2018