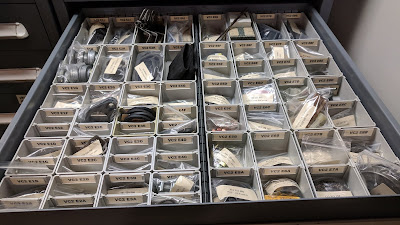 The OCD won over...I went back and applied double stick tape to all of the label holders in the cabinets.  I figured it'd take a really long time but I cranked it out in short bursts over two days.  I did some 're-bin' work as well and added some locations - which meant that I needed to order more label holders.  The lead time on them is 2-3 weeks so they'll show up right about the time I forgot I ordered them. 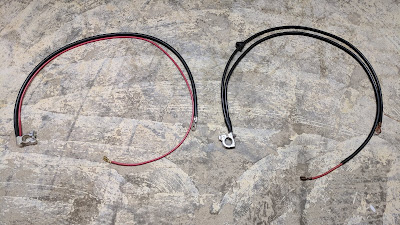 The order I placed from Wolfsburg West arrived today - the grommets I ordered were, predictably, not correct but I was able to sell them today at a zero net loss - so I didn't have to bother with sending them back and paying for shipping.

I ordered one of WW's reproduced positive battery cables since I'm restoring the pan...which kind of doesn't make sense because a few years ago - I'd ordered an original from Volkswagen and paid way too much money for it.  So, since I seem to enjoy 'rabbit holes', let's compare the $20 WW version to the, uh, not $20 VW version, eh? 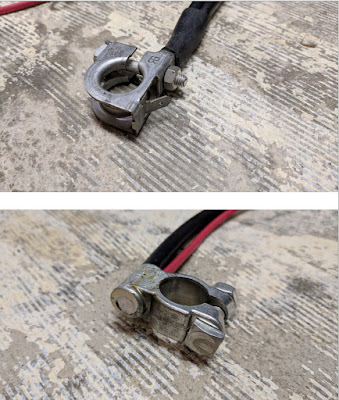 On top is the original part - the only two things that stand out are the extra tab for power to an accessory and that the clamp isn't solid like the reproduction (and most modern battery cable clamps).  I really like the extra tab but I wouldn't be willing to pay the surcharge that is the difference in price between these two items.

The WW version is very well made - very nice construction and solidly made.  In fact, I'm going to put it into use on the car when the pan goes back together. 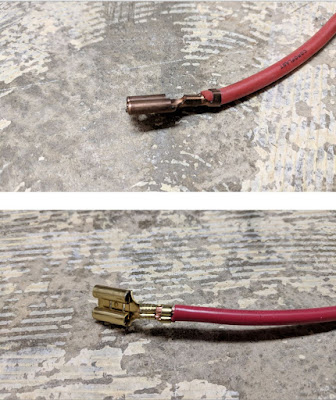 No real noticeable difference in construction here - very similar length of wire, good solid crimp on the connector, nice weight to the wire. 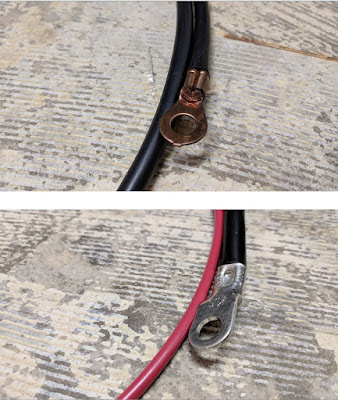 The starter wire ends are similar but slightly different.

Overall, the Wolfsburg West cable is a very nice part that will look great on a restoration.

I've been real happy with the quality of parts that come from them over the years.  It's a shame they don't get more into Type 3 parts. 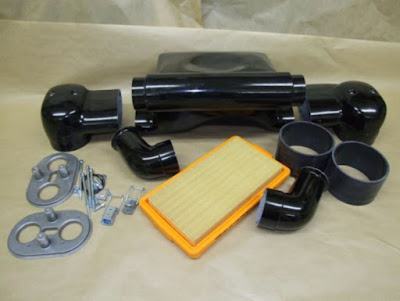 A recent conversation on TheSamba.com about cooler air intakes for aftermarket carburetors stirred up my thought process regarding how to build a proper intake and filter for the IDFs.

This company makes them for pretty much every ACVW platform except Type 3.  Looks like they've got the base plates for IDFs, the covers and a system that'll work on a Beetle.  They've got several versions and each one seems to have something that I like. 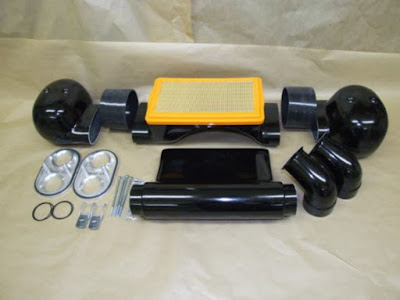 The gears in my head are turning - there's got to be an elegant way to do this...the center section would have to be situated more to the right side due to carb linkage and the oil cooler but...

I may just have to get some foam insulation or thin sheet metal and get out the rivet gun and come up with something, then figure out how to make fiberglass molds.