The first pass at adjusting the carburetors went rather well.  I got all four to read between 5.5 and 6 on the snail with a 1000-1100 RPM idle and the car runs much better.  I took it on a drive through the neighboring subdivision and, other than a high idle, it ran very well.  I know how to fix the idle now and I'll get on that tomorrow.  I think I'll drop the snail # to about 4.5 and the idle should be closer to 900 RPM.  I still have the weird whistle sound.  I pulled the bottom of the air filter to validate its role in the whistle - not a valid suspicion, unfortunately.

The video is way long but the engine sounds better, there's more power and it doesn't reek in the car anymore.  All positives.

I don't think the carburetors are dumping fuel into the engine - if they are it's very subtle.  I've hovered over the engine after shut down to see/smell and nothing stands out the last couple of times. 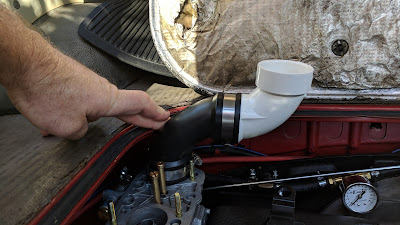 This is my Home Depot plumbing department solution for reaching the #3 carburetor to test airflow.  Fits nice and snug.

Next up after the idle fix is shortening the air filter studs and an oil change then I'll get back on the door building.

I am also going to remove the bar on the camber compensator - I think it's causing the current wheel tuck situation...removing it will let me know for sure.
at November 26, 2017