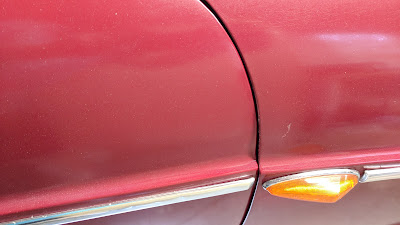 In between various other tasks for the day, I managed to get the passenger's side door apart.  I knew that this door wasn't going to be quite as nice as the driver's side because of a few visual clues.

The gap between the fender and the door when the door is opening is a clue that something ain't quite right with this door. 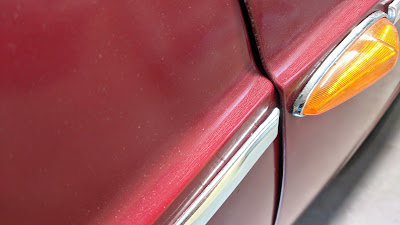 The gap between the two panels virtually disappears when the door is opened but they don't touch...likely some form of 'magic' that'll also affect the fender when I get around to removing it. 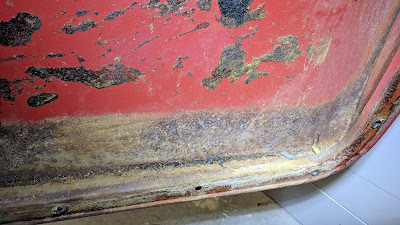 The plastic sheeting job was half-assed (no pics) and I could see rust but I didn't know how bad it would be until I pulled the armrest off.  The sound deadening piece pretty much fell off with very little effort.  All of the bolts were rusty on the backside and the bottom 4" of the door are flaky rusty. 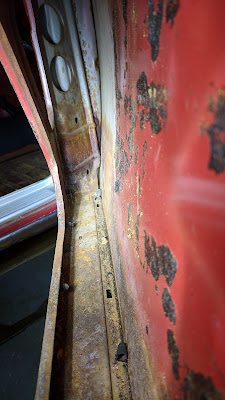 The follow up sign (other than the shitty plastic job) that this door has been opened up in the past:  The original clip boots are rolling around in the bottom of the door.

The rust is a bummer for sure...the odds of finding another 64 door in good shape without rust are slim.  If I were to look for a door, I'd also try to find one with a mirror hole (this one doesn't have one).  The other option is to keep the doors from the 65 and have them worked to fix the dents...guess I'll have to dig in and figure out just how bad the rust is on this door. 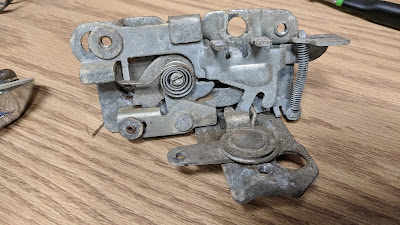 Seems like everything inside of this door kind of sucks in some way.  This lock is so dry and stiff that I cannot believe this one worked better than the driver's side.  Smashing sawdust and a fistful of unsalted crackers would have improved the lubricity of this lock.

Manually manipulating it is like nails on a chalkboard - scratchy, shrill and made the hair on the back of my neck stand up.  I'm going to try to clean it and lubricate it - if that fails I'll pull out one of my spares. 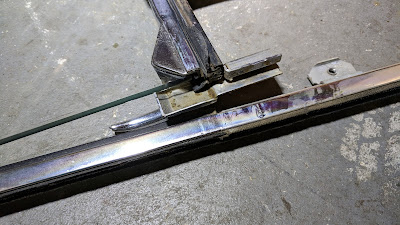 The wind wing welds were broken - partially explaining why the damn thing was so easy to open and hard to close.