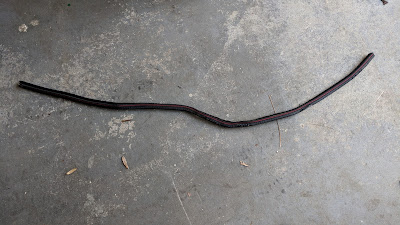 This is the main failure of the day:  The Brazilian made 'red stripe' felt trim did not install easily or cleanly.  I fought with it for a good 20 minutes before I gave up and yanked it out.  I didn't get a photo of just how shitty it looked once it was installed so you'll have to take my word for it: It doesn't work.  Maybe it'd work on a later car but not this one.  It's also too short by about 4" to properly cover the entire channel. 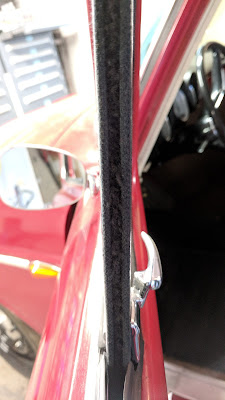 This is the green strip felt - it fits the channel but the glass doesn't really fit in the felt once it's installed.  After everything was installed, I tried to lift the glass up with my hands and after getting about half way, the car door lifted up but the glass didn't budge.  It's safe to say that this isn't the solution for the doors.  Last thing I need to do is break a window regulator and have to tear the door apart again because I took a short cut.

I've been advised that ISP has the proper felt trim and that it works...my plan, for now, is to call WW and find out the ETA for their felt.  If it's a ways off, I'll roll the dice with ISP.  At some point, I'm going to need this thing to have functional windows...I need to get some miles on this engine for break in and it's going to take forfuckingever if I do it 5 miles at a time.

I'd rather not install and remove the door trim five times if I can help it...but the ability to roll the window up and down is kind of the deciding factor about whether or not I have to do it again. 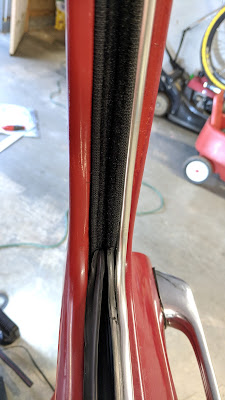 The larger felt trim fit very nicely around the door except where the repop Type 1 clips were fitted.  Since I'm going to have to remove this trim again - I am going to try to use the original clips after a little 'massaging' to get them to fit snug on the door frame.

I'm still on the fence about pulling the outer scraper rubber but since I have the Type 2 scrapers I bought from Wolfsburg West, I may just try to install them.  I discovered today that I can use aluminum pop rivets and then smash them flat in the vise. 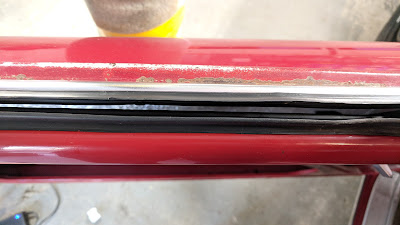 Using the outer scraper as it came with the trim and a NOS inner scraper - there's a gap of 14mm - too wide for the 5mm thick glass and neither scraper contacts the glass in more than a couple short spots.  The NOS seal doesn't fit as well as I'd have expected but that might be due to a design revision and I have the late version or something...I haven't really looked into it yet. 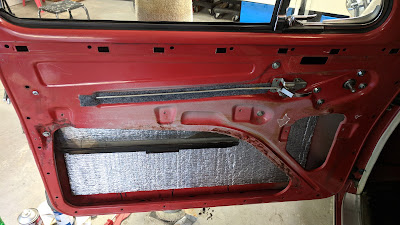 I also spent some time cleaning the inner section of the driver's side door and applying sound deadening.

The passenger's side door got cleaned and primed with red oxide paint.  Depending on how it sticks, I plan to top coat with a red rattle can paint and then apply sound deadening once the majority of the guts are in the door.  I put it in first on the driver's side and it got a little fucked up when I installed the window channel and vent window.

I still have the weird groaning to chase down in the rear of the car.  The camber compensator is off the car so that's not it...I'm going to back the parking brake cables off completely to eliminate them...then I'll have to dig into each wheel assembly until I find the source of the noise.  Below is a video of the last test drive I did in the car - I start the video at about the five minute mark as I'm driving through a parking lot and it's pretty easy to hear the groaning.  I don't know if it happens at higher speed because of the engine noise.  Either way, I need to figure out what it is and eliminate it.