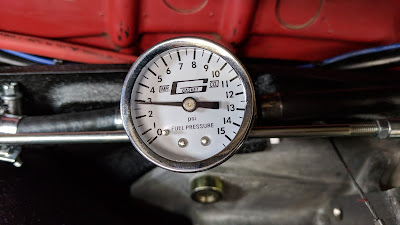 I installed the fuel pressure gauge this morning and before I installed the regulator - I fired up the car.  Three key turns before it would start but it did start - and once it settled enough, I went back and took the first picture - this one - that shows that without the regulator installed, the fuel pressure is 3psi.  I was expecting this to show something closer to 5psi which would give me confidence that the regulator install would help control the problem I'm experiencing. 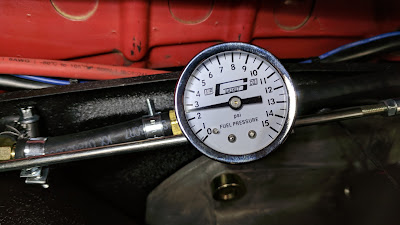 After the engine warmed up, the pressure drops to about 2.5psi, which seems a little low given that the information I've found about Webers (and presumably, their clones) prefer about 3psi. 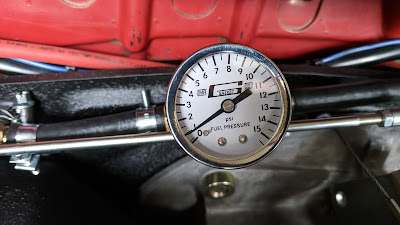 After a few minutes of run time, I shut it down and took this picture.  1psi of pressure.  Not really sure if there's supposed to be any residual pressure in the lines because I've never measured fuel pressure in an old VW before today.

This is, of course, assuming that the gauge is correct.  How can I possibly tell?  Buy another one!  Nope, not going to do that...I've spent 3x what I expected when I converted to an electric pump.
I called the engine builder to discuss the issue - he's suspecting that either a float is stuck or a needle/seat is defective.  I don't have enough time to tackle this today but I will get on it tomorrow. 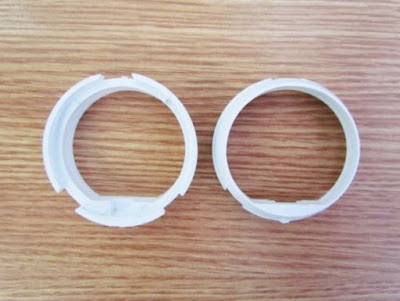 In other news - I came across another potential solution to the adapters for the headlights.  P45t to H4 adapters.  It'll allow me to use the LED headlights on the 3 bolt lens housings - which would eliminate the need to cobble together some new adapters for the headlight buckets.  My brain ain't as fast as it used to be - I could have thought of this two weeks ago and saved myself a sweaty fist full of cash.

I think I'm going to sell my roof rack - it's only been on the car a couple of times and tends to get used to store shit I'm too lazy to store somewhere else.  I'm also thinking about selling off the spare doors from the 65 since the doors on Nigel are in pretty good shape (aside from the dents).  I have to go through and figure out what else can be sold off.

Tomorrow is another day and I'm hoping it's productive.
at November 08, 2017