The 'two step' of progress

I took a short video of engine start up to document how the engine starts with the Weber clones.

I had turned it over once before this video started so I missed the full effect of how hard it is to get it started. 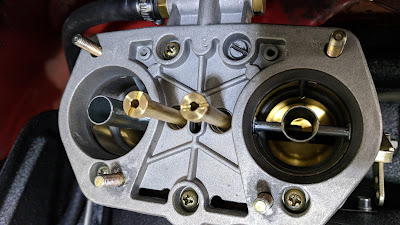 I removed the air filters and discovered that these carburetors have been opened previously - I was under the impression that they were new carburetors.

In any event - I called the engine builder and we had a chat about how to diagnose the issues based on what we know and it was determined that the best method was to send them back to him for diagnosis.  During the discussion, I requested an exchange with real Webers and he agreed...so in a couple of weeks, I should be installing brand new 40 IDFs. 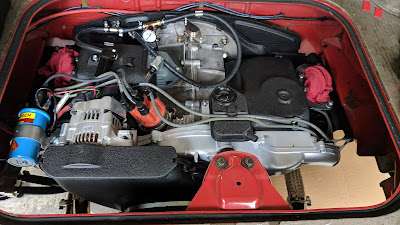 This is how things will sit for a while until the carburetors arrive.

I turned the carburetors upside down after I'd removed the fuel, dried them out and put them back together and it sounds like the float on one wasn't moving...just a guess though.  Something wasn't right.

While they're gone I will focus on tidying up a few other loose ends. 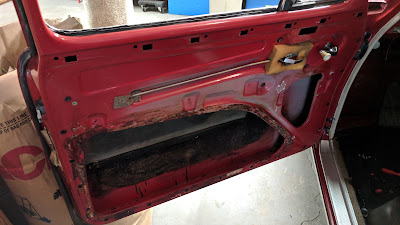 Speaking of doors, I pulled the panels off of the driver's side and lubed the lock mechanism so I can use the key to lock/unlock the door with the key instead of climbing across the inside of the car.

The end result of this task is that I can roll the window up and down easily and I can lock/unlock the door using the key.  I really need to rebuild the scrapers and replace the check rod buffer...I'm on the fence about going down that rabbit hole but I probably will because I have two weeks to improve something and smoothly operating doors/windows is a pretty nice thing. 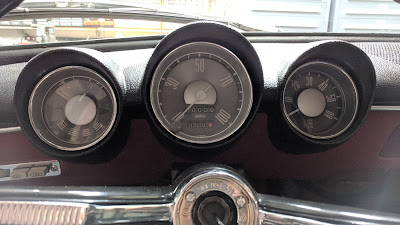 Swapped out the KMH speedo for the MPH speedo.  The gauge cluster is looking pretty good.

I've got to get the horn bit worked out so I can get the button reinstalled and it doesn't look like a half-assed project. 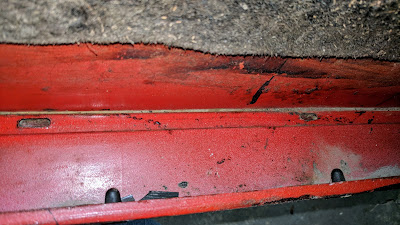 While working on the doors of Nigel, I noticed that the doors had multiple drain holes in the bottom of the door.  I don't recall noticing this in any other doors although I think it's a much better design than the single drain version that replaced this one.  That one drain hole gets clogged very easily and the doors fill up with water and rust.  This earlier version has four or five drain holes.  The sound deadening is also an asphalt sprayed fiber. 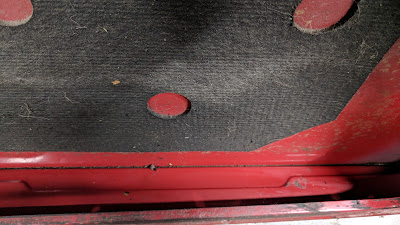 This is the inside of the door from Icarus - no holes in the bottom - different stamping and it has the more common sound deadening with random holes.

After I noticed this - I spent way too much time looking at both doors and then trying to decide what I'll wind up doing when I restore the car - sound deadening panels (like Dynamat) or spray them with color coordinated bedliner?  No one will see it but it would be nice if whatever is in there helps keep things quiet. 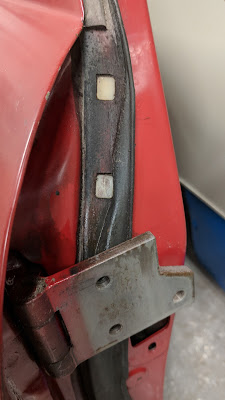 These two little clips (311 831 719) are present on the doors from the 65 S (Icarus) but they are not present on the doors on Nigel.  The parts book doesn't specifically call out when they're started in production only that they're tied to the newer door seal style (711 F /712 F).  Both cars have the same 3 bolt door hinges - which are supposed to be fairly rare.  Leaves me wondering if it's a coincidence or if the hinges really aren't that rare.  I've never seen them for sale unless they're attached to a door.

I posted these doors up for sale on a Facebook group tonight - they're probably priced higher than most are willing to pay.  They're not a perfect match for Nigel but if they don't sell, I've also no problem with hanging on to them...no one will know they're not the correct doors (if I use them) unless they're a real Type 3 nerd...and let's face it - there aren't many of them left anymore.