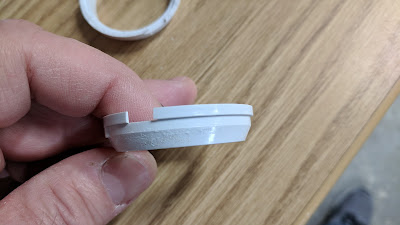 The headlights are finished...

This is the unmodified P45t adapter before I shaved off some of the side bit to make this contraption work. 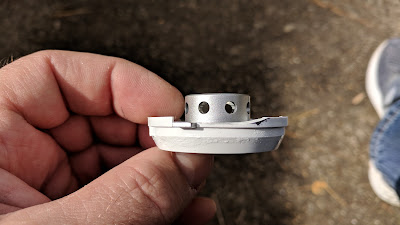 One of the four modifications to the P45t adapter to allow clearance for the cap to engage the housing.  This is the second one and it was much easier after I'd experimented the night before. 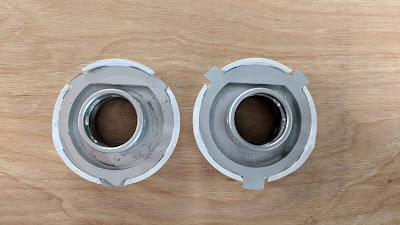 The left side is the modified H4 adapter.  The right side is how it arrives out of the box.

The first modification was done using a 4" grinder - it got the part hot and did more melting than grinding.

When I modified the second one today - I used a bastard file - much faster, cleaner and straighter. 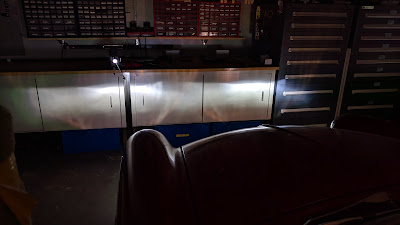 Not a great shot but it shows the fairly clean cutoff at the top.  They are not aimed properly yet but I think they'll be pretty nice once they're aimed properly and I get a chance to get out and drive in the dark.

Another up side is that I get to keep the city lights in the 3 bolt headlights.

Toward the effort, I was able to get the carburetors mostly installed.  I cannot get to the two inner nuts on the 3/4 side to properly tighten them.  These Webers are larger in body than the AA clones.  I'll have to find a curved wrench before I can finish the install.  I tried to make my own from a cheap 13mm box wrench but my torch doesn't get hot enough and I just broke the wrench.  Once that wrench arrives, I'll be able to finish up the installation...maybe while everyone is wiped out from Black Friday shopping, I'll be able to go out and drive around a bit.
at November 21, 2017