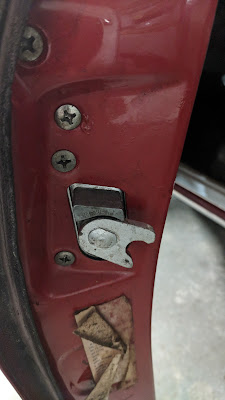 Oooh!  Look!  A door lock...yeah.  But stay with me here, the difference in effort to lock/unlock the doors (from both inside and outside) is remarkable!  Very little to no effort from inside and turning the key in the lock is now as smooth as my last car that had key locks.  I forgot that these locks could be so smooth!  I actually smiled when I opened the door and locked/unlocked the door.  There I was, standing in the garage, smiling like an idiot while I open and close the partially assembled door on my 50+ year old car.  So this is 'mid-life' happiness, I guess.

Early in the afternoon, the window trims arrived, along with the felt strip clips.  They're three days early (due on Monday) so I figured I'd get started on the driver's side door.  The window trims are not great but they're far better than what I removed in terms of rubber and dents.  The construction is mediocre but it'll work for now.

I test fit the felt strip in the wind wing channel - that's going to suck a little bit because the felt strip is wider than the channel and it compresses down to a slot that's too thin for the glass. 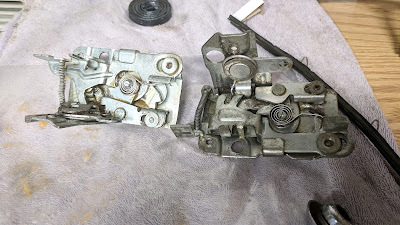 This door lock was lightly coated in hard crusty grease and I spent WAY too long cleaning it today.  All told, I think I spent two or three hours cleaning four door locks - trying to figure out which set to install.

These two are soaking in Fluid Film - I'll clean them out one more time before putting them away.  The benefit of storing them with Fluid Film is that it doesn't turn into crusty wax...so using them later won't be a chore. 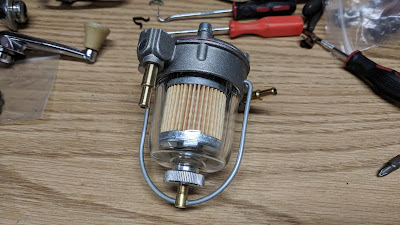 The small Malpassi Filter King arrived today from the UK.  It's a fuel filter and pressure regulator all in one package.  Now all I need to get around to doing is figure out where to mount it. 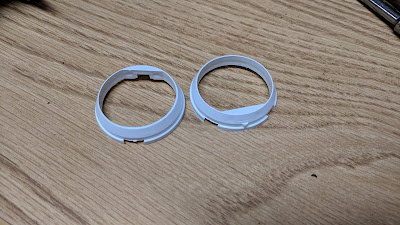 These two little plastic rings are P45t to H4 adapters - they landed today and will, hopefully, be tested tomorrow.  I really, really hope the LED bulbs fit the 3 bolt headlight housing in the headlight bucket.  I think it's going to be a tight fit.

I'm also going to test the little film that's supposed to reduce the 'blue' effect of the LED bulb to a more 'natural' color suitable to a classic car while providing brighter light. 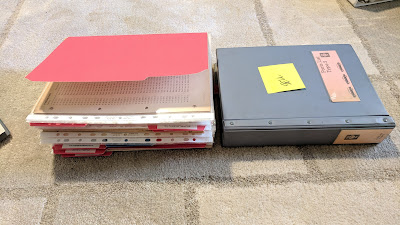 This is the stack of goods that remain after I completed the parts book that I'm keeping.  It's one complete book plus nearly two more complete books in pieces.  Not all of the pages are in great shape but it's a lot of material.  I have a prospective buyer and if he pays, it'll be on to another home.

I've had about all of the scanning and printing I can handle.  The reason I put this off for three years became abundantly clear about half way into the process.  I'm looking forward to the end of this project.

The glass tubes for the LED bulbs arrived today as well (it was a good day for packages!) so that chapter is closed as well.

Speaking of 'new homes', I sold the roof rack today...so I'll be building another crate to ship it to California next week.

The replacement carburetors arrive tomorrow afternoon - I have a lot of work on the board now and I'm hoping to be able to drive the car again in a few days.
at November 17, 2017