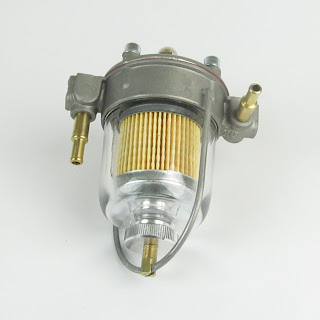 Progress for today included scanning sections 2-7 of the parts book, correcting the spade connectors for the safety relay that I'm not currently using and ordering a 'back up' fuel pressure regulator/filter - Malpassi Filter King.  The more widely available version is 85mm and has large diameter inlet/outlets with the provision for a gauge - it's overkill for this engine.  My long game is to use the gauge that's coming tomorrow to set the fuel pressure and then remove it from the system.  The fewer potential leak points the better as far as I'm concerned.  I'll use it again when this arrives next week.

The Filter King that I bought (and shown in the  photo) is the smaller, 67mm version, perfect for a car with low pressure requirements that requires either 6mm or 8mm inlets and outputs - great for the time when/if I change the fuel delivery to the larger diameter hose.  The glass is nice and thick and I'll eventually mount it where it shouldn't get rocks kicked up into it.  I like the idea of thicker glass, a bigger filter and a more robust construction as well as not having to add another potential leak point. 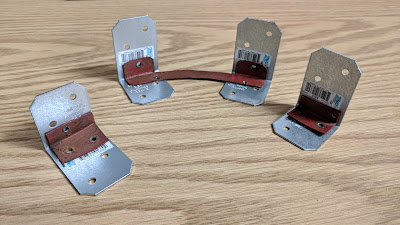 I found the correct size of bracket from which to cut down to make the new headlight bucket brackets.  The upper bracket is going to change a bit - from one piece to two - but four mounting points should be super sturdy for the headlights.  I imagine I'll have to make a few of them before I get them right.  I tweaked the existing brackets to get the left side headlight mounted but it's a touch too low in the trim ring.  It'll do for now.  It's temporary...just to get functional headlights that I can aim properly.  Good thing those LED electronics are IP67 rated. 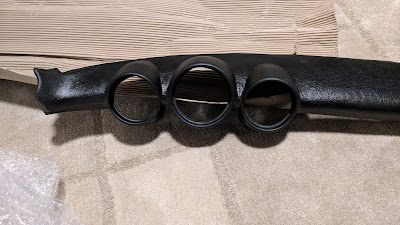 Evening edit:  I bought one of the repop dashes out of South Africa because the guy doing them said it's likely to be his last run.  It arrived today and I just got it open.  From 5' away, it looks pretty good.

Here's the left side 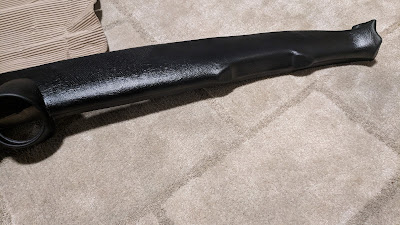 Here's the right side 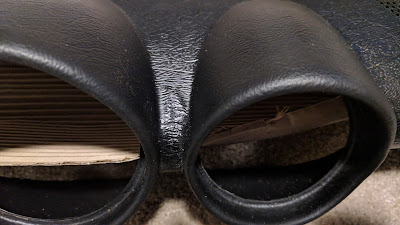 First thing I noticed was the space between the gauge pods - both had some sort of 'issue' that was corrected during manufacturing of the mold - it's very noticeable - almost distracting. 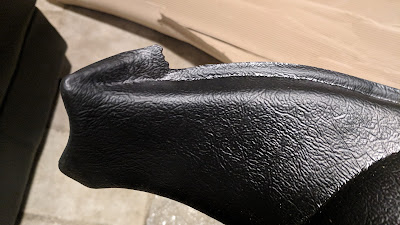 The trimming around the outer upper perimeter is jagged and could be corrected.  I think I was expecting something slightly more 'finished' around the edges. 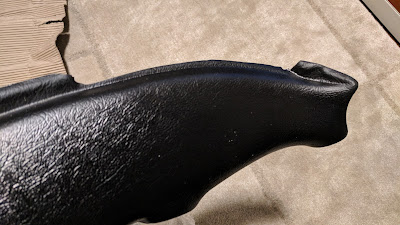 Upper right side of the dash - not bad. 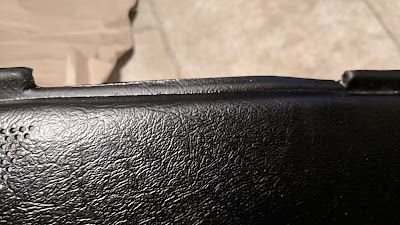 Middle right of the speaker grill (which looks pretty good). 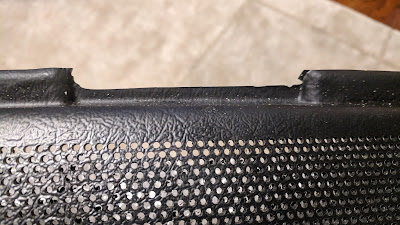 Middle of the speaker grill - a little uneven/jagged but not bad overall.  A bit of trimming and it'd be decent.

Overall, I have mixed feelings about this thing...for the price, it's not bad...but the defects between the gauge pods bothers me more than it probably should.  Who knows - maybe someday when my current dash cracks, I'll think this one is pretty awesome and put it in my car.
at November 06, 2017